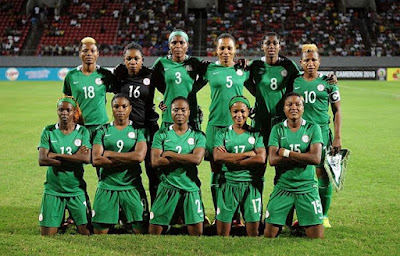 The Nigeria Super Falcons book a place for final for beating South Africa’s Banyana Banyana 1-0.for the on going Africa Women’s Cup of Nations (AWCON).

Nigeria will take on hosts Cameroon in the final match of the 10th.

At the last edition, the Super Falcons defeated their neighbours to the East 2-0 in Windhoek to emerge champions.


Top scorer at the last edition of the competition in Namibia, Desire Oparanozie scored her second goal of the tournament to secure the win for Nigeria.

It was a bullet shot from a free-kick at the edge of the penalty box, but it was enough to send the Super Falcons into the final for the eighth time.

Both represented the continent at last year’s FIFA Women’s World Cup finals in Canada, where the Indomitable Lionesses reached the Round of 16 as the Falcons exited at group stage.

An explosive match is at hand to determine Africa’s current best team at the Ahmadou Ahidjo Stadium.

In more ways than one, it would appear that Nigeria and Cameroon are presently the strongest nations in women football in Africa.