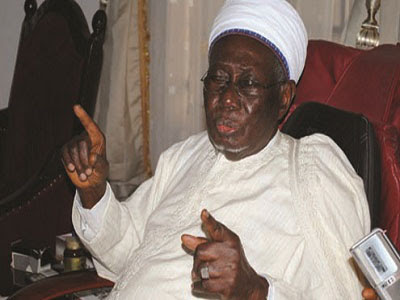 But the solemn ceremony had a tinge of drama. His son, detained former National Security Adviser (NSA), Col. Sambo Dasuki, rejected the Federal Government’s offer of a presidential aircraft to attend the interment.

Dasuki did not attend his father’s burial “with security escorts like a criminal”.

He said he was prepared to give his father the last honour only if the government complied with the court’s ruling on his bail.

According to the nation report,It was also learnt that the late Sultan’s last gift to his son is a copy of the Holy Quran when it became impossible for the two to meet again.

According to sources, the health of the former Sultan deteriorated in the last two weeks and the government was availed with a security report on him.

On compassionate ground, the Federal Government granted the former NSA the leave to visit his father but he declined because of the condition attached to the permission.

It was gathered that Dasuki was unhappy that the government asked him to go and see his father at a time it was obvious he could no longer recognise him.

The ex-NSA also said he could not see his father as a detainee when a court had granted him bail.

A source in government, who spoke with our correspondent, said: “When we received report that the 18th Sultan was critically ill, we offered the ex-NSA the opportunity to see his father in the last two weeks but he rejected it. He said the court’s ruling on his bail should be respected. But the bail was granted only in respect of one of the cases filed against him.

“After the death of the Sultan, the government made a presidential jet available to him to attend the burial but he declined the offer.”

A family source however said the ex-NSA insisted that he would not see his father or attend the burial as a detainee.

The source quoted Dasuki as saying: “I cannot see my father like a criminal. They asked me to go to my father, escorted by security detail instead of granting me bail.

“Two, at the time the offer came, my father was critically ill and he was not in a position to recognise me again. I only told them to abide by the law by respecting the court’s ruling on my right to bail.

“When my father died, they said a presidential jet is available to take me to Sokoto with escorts like a criminal. How does it sound to attend your father’s burial like a criminal?”

It was learnt that the late former Sultan sent a copy of the Holy Quran to his son, through his wife.

Another family source added: “When it was impossible for the late 18th Sultan to see his son, he sent him a copy of the Holy Quran as a parting gift before his health deteriorated.

“The late Sultan returned from London in January and he had no opportunity to see his son before he died. We have taken it as Allah’s will.”

Minister of Interior Abdulrahman Danbazau confirmed in Sokoto yesterday that the former NSA declined the offer to visit his late father in an Abuja hospital and to be at his funeral.

Speaking to reporters after the burial, he said: ‘’ We discussed with the DG SSS yesterday and he (the ex-NSA) was offered the opportunity to visit his late father on his hospital bed in Abuja.

‘’ He declined and he preferred to pray for him. He was also offered the opportunity to be in Sokoto throughout the mourning period. He also declined, preferring to pray for him.’’

The late Dasuki died on Monday night, a few weeks to his 93rd birthday.

His remains were buried according to Islamic injunctions at the Hubbaren Shehu, where emirs’ bodies are interred, a few metres from the palace, after a prayer led by the Chief Imam of Sultan Bello Mosque, Sokoto , Malami Akwara.

Sokoto State Governor Aminu Tambuwal was absent. He is believed to be away on an official engagement.

The remains of the former Sultan, who reigned between 1988 and 1996 when he was deposed and banished to Kaduna by the Sani Abacha regime, arrived at the airport at about 12:47pm aboard West Links aircraft N604WL. They were conveyed in an ambulance followed by a motorcade to the Sultan’s palace.

Seven aircraft, including the one that conveyed the body landed in Sokoto,ý carrying prominent people to the funeral.

The Federal Government delegation was received at the airport by the Sokoto State Deputy Governor, Ahmed Aliyu.