Niger Delta Avengers says ‘Our struggle is a reaction to years of orchestrated state, economic and constitutional colonialism against a region & its people’ 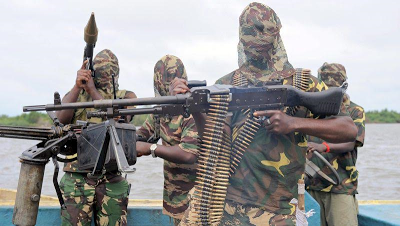 Militant group The Niger Delta Avengers on Sunday revealed why they resumed attacks on oil facilities. A statement issued by the group’s spokesperson, Mudoch Agbinibo, says their attacks restarted because of the “deliberate move by the military establishment to undermine any effort of dialogue and negotiations with the people of the Niger Delta.


Titled Don’t blame NDA, the statement read:
We all know that Peace is not the absence of war. Sincerely speaking, the High Command of the Niger Delta Avengers cannot be blamed for the continuous bombing of crude oil export pipelines and other oil installations, since the Government has been relentlessly carrying out military build ups to continuously harass communities and indigenes of the Niger Delta after the November 1st meeting of the PANDEF and President Muhammadu Buhari.

We see this as a deliberate move by the military establishment to undermine any effort of dialogue and negotiations with the people of the Niger Delta. The path to sustain the cessation of hostilities in the region among fighters and structures cannot be achieved overnight, when there are clear cases of deliberate security surge by the Nigerian government.  We ask for understanding on the side of the PANDEF and the general public.

The High Command of the NDA is only reacting to government’s deliberate attempts to undermine the process to dialogue and negotiations. It will make a lot of sense on the part of the government of president   Muhammadu Buhari to restrain the security agents/agencies from engaging in activities that are inimical to the process, the people and communities of the Niger Delta. There was high hope and expectations from the people of the Niger Delta after the November 1st meeting between PANDEF and President Muhammadu Buhari for a genuine dialogue and negotiations process to kick-start. Instead the government’s security establishment is busy building up clogs to the process that will place our people at position of weakness which is unacceptable to us and  so, there is bound  to  be equal reaction.

The idea of communicating with our fathers, leaders and royal fathers under the leadership of Papa Edwin Kiagbodo Clark’s PANDEF before acting will only amount to mere propaganda   while the head is being cut off. We believed that our fathers, leaders and royal fathers are ready to meet the government of Nigeria with representatives of IOCs and the neutral observers but not with guns, warships and jet fighters terrorizing their communities which of course is one of the sixteen points key demands presented to Mr. President, So the government should stop the ostrich game. We did not start this struggle for the sake of bearing arms against the Nigeria state; it is a reaction to many years of orchestrated state economic and constitutional

colonialism against a region and its people over six decades. Until the burning issues of resources control, fiscal federalism and inclusive development are addressed no force will stop this struggle even with bare hands.
The government of Nigeria is running against time by undermining the resolve of the Niger Delta. The government needs the Niger Delta more than we need the government.

A careful analysis of the directive by general Muhammadu Buhari, to the security agencies to identify militant leaders and their camps shows that, the man do not have any sense of history and apology for the roles he played in the killing of innocent civilians and Ken Saro Wiwa in Ogoni that were carrying out a peaceful protest in 1995.  President Muhammadu Buhari should think before he act on this his fifth journey into national affairs.

Those obnoxious strategies like Choke Points, Operations Delta Safe, Operations Crocodiles Smiles etc, are doomed to fail like Operations Hakuri II, he engineered and administered under general Sani Abacha. Even the security hierarchy is also sympathizing with his inhuman

dispositions to the Niger Delta question. That is more of the reasons the High Command of the DNA has given the clear directive to all field officers to avoid confrontation with security agencies in their line of duty. The everyday deployment of military hardwares, houseboat, personnel etc is a dilemma of government insensitivity and incapacity to the legitimate demands by the Niger Delta people since 1994 under general Sani Abacha.

The Niger Delta struggle is the people’s project. So, the more groups that are involved the more the festivity. There will be no cold war with any group and groupings no matter the circumstances of their emergence and their modus operandi.