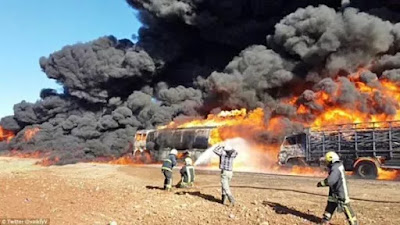 The Avengers in a statement issued by its spokesman Mudoch Agbinibo and made available warned that there is doom ahead. The group said: “At about 11:45pm on November 15, 2016, our Elite Strike Team 03 struck Nembe 1, 2 and 3 truck line operated by Agip, Oando and Shell with supply capacity of 300,000 barrel per day to Bonny export terminal in Bayelsa state”.

This is in response to the so-called ‘Operations Sharkbite’, an art of terrorism commissioned by the tyranny of the Nigerian navy establishment and orchestrated by some elements of the ruling political class to continuously undermine any effort by the Nigerian state to address the legitimate demands of the people of the Niger Delta, and a conspiracy to bloat the accounts of some security contractors and conflict merchants within the party structure of the APC.

he militants further said that they are determined to “continue this war”, adding that it was not against peace, but desired “peace that which comes with honour”. “We are determined to continue this war by all means necessary, until that environment prevails for a genuine dialogue and negotiations within the framework of the sixteen point key demands presented to President Muhammadu Buhari by PANDEF on the 1st of November 2016,”

the statement added. “We want the peace with honour, we don’t want the peace of our time. Since that moment military was drafted into the Niger Delta as an instrument of suppression to our fatherland against all peaceful protest and legitimate demands the fear had gone. The message is getting stronger with more messengers.” The affected oil companies are yet to confirm the militants latest attacks.

he militants group earlier they gave the Muhammadu Buhari-led federal government and NUPENG seven days to immediately ask all multinational oil companies operating in the Niger Delta region to evacuate their territory. The attacks of the oil militants have drastically reduced Nigeria’s oil output that caused economic recession.

The Nigerian leader has several times claimed that the authorities are negotiating with the Avengers to renew peace in the region. However, the group said that President Buhari is not sincere in his efforts.