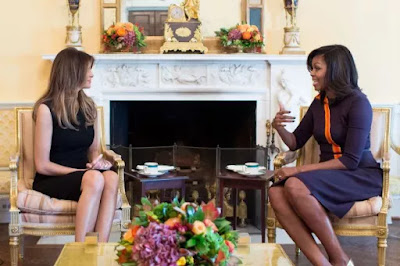 The US First Lady Michelle Obama on Thursday, November 10, met her successor, Melania Trump at the White House’s Oval Office.

Michelle Obama led her successor, Melania Trump, on a tour of the White House Thursday as the two chatted about the challenges of raising children amid the tumult of presidential politics, New York Post reports. The press were barred from covering the visit that coincided with their husbands’ 90-minute meeting in the Oval Office but Obama’s press secretary, Josh Earnest, provided some details of the visit.

Melania Trump, 46, will be the first immigrant first lady since 1825, when Louisa Adams, the English-born wife of President John Quincy Adams, occupied the White House. The native of Slovenia, a former model, moved to the United States in 1996 and became a citizen 10 years later after marrying the billionaire developer in 2005.

Ten-year-old Barron Trump will be the youngest son of a president to live in the executive mansion since John F. Kennedy, Jr. Earnest.   After the tour wrapped up, the women walked to the Oval Office, and the two couples spent time together before the Trumps left.