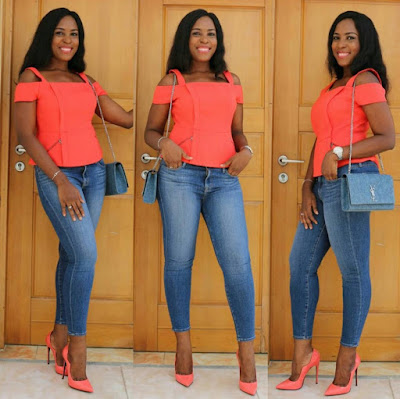 From growing up in Idi Oro, a Mushin suburb of Lagos to owning a mansion in the highbrow Banana Island, Nigerian superblogger and former model, Linda Ikeji, admits that she has come a long way. OVWE MEDEME caught up with her at the recent launch of her new concept, Linda Ikeji Social, and she talks about her struggle so far.

10 years is a long time. How would you describe the journey so far?

The journey has been amazing. I didn’t expect to be here today because when I started hustling in those days, social media wasn’t popular in Nigeria. The first thing that I came across was blogging. And to be honest, when I started in November 2006, the last thing on my mind was that it was going to change my life as much as it has. It was just a place for me to be creative because I love to write stuff down and I didn’t think that ten years from now, this would happen. So it wasn’t something that I envisioned. It’s been an amazing journey, definitely something that I’m extremely grateful for. A lot of us are on social media but not everyone can say that it has changed their lives so tremendously.

So I’m really grateful for how far I’ve come.
Before you started making money from the blog, were you not at some point frustrated?

So many times. The worst was definitely September 19 2010. It was my 30th birthday. I was broke, I was angry because I had been doing nothing for a long time and I was still struggling, I was still borrowing money. So I was extremely depressed and very angry with myself. I felt like a failure. I would cry a lot and then open my laptop to blog. I didn’t know that was where God was leading me to. And so, after my 30th birthday, my life really changed.
You’ve carried a lot of controversial news, particularly about artistes.

What is your relationship with them like, especially Wizkid?

I don’t want to talk about Wizkid. To be honest, I have a cordial relationship with other entertainers. I’ve had run-ins with a few of them but in recent times, that hasn’t happened. It was when I was being carefree and careless with stories that I write. But apart from him, in the past year, I’ve not had a big issue with anybody.
How have you been able to manage it with all the threats that are thrown your way? Doesn’t that leave you scared?
The only person that threatened me was him. No it doesn’t scare me. I do more good for them than they acknowledge. Some of them are my friends, some of them have been to my house but the negativity that comes with blogging is fine. Some people will take offence, some will react in different ways. I’ve been doing this for ten years. If by now I’m not used to the backlash, then I should get out of the business.
From the feedback you get, do you feel loved or hated?
It’s a combination of both. I get a lot of hate and I get a lot of love. But I try as much as possible to hold on to the love and not pay attention to the hate because I know the hate is coming from a very different place.

Sometimes when I trend and I see some vile comments about me, I’m like, you’ve never met me, why are you saying these kinds of things about me? I’ve grown such a thick skin, I just look at it and I laugh. I know when people are frustrated and depressed because I have been there. I’ve been depressed and I’ve been angry and my anger was always towards those who are successful and when I say hurtful things about them, it makes me feel better. So I allow them that grace to just vent. I understand that success comes with a lot of hate.
In fact, that is one of the ways to know you’re really doing well. But of course, I get a lot of love. I get a lot of people who tell me that I inspire them and those are the ones I pay attention to.

Have you lost any valuable friendship because of a story you wrote?

Absolutely not; I haven’t. I’ve lost people who don’t agree with what I do but nothing valuable.

With this your new concept, don’t you think you are taking on too much at a time?

I’ve been blogging for ten years and I’m bored. I want to do something else. I’m 36, this is the time I have the energy and passion to run this. Besides, I’m delegating. I have a staff of over 30 people working here. So it’s not too much really. I think people try to limit themselves. I don’t limit myself at all. I feel like there’s absolutely nothing I can’t do.

You made a video on your birthday where you talked about a lot of things. Why did you do that?

What are you looking for?

I keep telling people. It’s not that men are scarce. They are not scarce. The type of men that some of us are looking for are scarce. If I want to get married next week, I can. I want a man that I can look up to. Somebody that inspires me, somebody that will push me, motivate me; somebody who has had some success in his own career. I’m inspired by successful people. I can’t wait to meet someone like Tyler Perry.

Does that mean you can’t marry a poor man?

No, I can’t marry a poor guy and I’m being honest about it. He doesn’t have to be rich but let him be successful in his own way.
Have you had to review you standards when it comes to men?
When I was 30, my standards were extremely high. But I wasn’t really looking. I was just so focused on work because I’ve always been so ambitious. I wasn’t focused on marriage and kids and I felt like that would draw me back. So I wanted to just do my stuff. It was just recently that I started asking myself some questions. That I started thinking about it.Now, I have only three criteria.

What are the three?

He must be successful. He must be a good man in the sense that he has to be very supportive of what I do. If he tries to stifle me, I’m out. The third one, is the one that likes to eat groceries well (laughs).

Do you think you’re controversial or just misunderstood?

I don’t go out of my way to look for controversy. I think that maybe I’m misunderstood. People forget that blogging, even though it started as a passion, is now a business. There’s Linda the blogger and there’s Linda the person.
Personally, if I was not a blogger, there are some things I won’t pay attention to, because I don’t care. I have things to do in my life. But because I’m a blogger, I have to pay attention to little gossip. I have to pay attention to who is clapping back because my readers wants to see all of that. But personally as a human being, I don’t wish anybody ill, I don’t want anybody to fail, I don’t want anybody to cry or feel bad about comments. I think I’m misunderstood which is fine because people who are close to me know me and those are the people that really matter.
Kemi Olunloyo once accused you of benefiting from Dasukigate…

The reason I didn’t make an issue out of the Dasuki stuff is because it was overwhelming. I bought a house in Banana Island for half a billion and people can’t wrap their heads around it. They start thinking it has to be something shady. Up until the scandal blew open, I never heard about the man Dasuki. So I know I’m not guilty of anything.
When you get married, will you leave your Banana Island mansion?

I will move to the man’s house; as long as it’s not a three bedroom flat.
Why do you feel comfortable talking about your age?
I read somewhere online where they said I’m 42. Let me tell you, it’s so easy to know someone’s age. Just find out the year they finished secondary school. I finished Lagos Anglican Girls Grammar School in 1997. I was 16 going on 17. So if I’m 42, it means I finished secondary school in the 80s. The reason I talk about my age is because I was a model. In fact when I did my first show in 1998, I wasn’t up to 18. I had to lie that I was older than I was. I was 17 plus. How can I now be 42 in 2016? People already know my age.