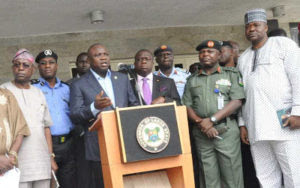 The Lagos State House of Assembly today, November, 28 approved death sentence for kidnappers, whose victims died in their custody.

The approval followed the adoption of a report presented by Adefunmilayo Tejuosho, the Chairman of the House Committee on Judiciary, Petitions, Human Rights and Lagos State Independent
Electoral Commission, LASIEC.

NAN reports that the bill was sponsored by the Speaker of the House, Mudashiru Obasa.

The bill prescribed life sentence to kidnappers, whose victims did not die in their custody.

The bill states that any person, who kidnaps, abducts, detains, captures or takes another person by any means or tricks with intent to demand ransom or do anything against his/her will, commits an offence, and liable on conviction to death sentence.

Also, the bill is against false representation to release a kidnapped or abducted person. This attracts seven years imprisonment.