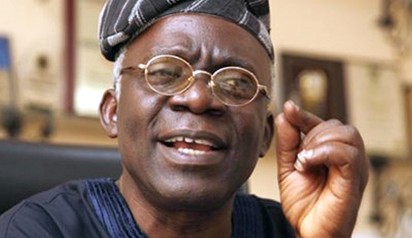 Femi Falana, SAN, might have now realized that President Muhammadu Buhari’s administration, is worse than that of former President, Goodluck Jonathan, having confessed that there is inherent evil in the proposed $29.9 billion loan, the President seeks to borrow.

According to him, at the end of the day, only 50 percent of the amount will arrive Nigeria, with generations suffering to repay it.

Vehemently opposing the move to obtain the loan, Falana during the weekend, counseled the President to channel recovered loots towards addressing the growing economic hardship in the country.


Falana, stated this while speaking at the 4th Convocation Lecture of Oduduwa University, Ipetumodu, Ile Ife, adding that, he had written the Minister of Finance, Kemi Adeosun, to that effect.

The Renowned Human Rights Lawyer,Continuing, Falana called on the government, to recover the looted wealth of the nation, and prosecute the culprits, without considering their party affiliation.

He further called for the investigation of payment, and servicing of debts, insisting that most of the loans that gave rise to them, were diverted by public officers.

Falana said: “Curiously, the Buhari administration has failed to address capital flight, and round tripping by financial institutions, otherwise why has the government been reluctant to ask EFCC to recover, and sanction the oil and shipping companies, which under declared the crude oil worth billions of dollars shipped from Nigeria, under the Jonathan administration?

“Why has the Federal Government failed to recover the $20.2 billion, withheld from the Federation Account by the NNPC, and some oil companies from 1999-2012?

“Why has the Federal Government not inquired into the allegation that the sum of $25.4 billion, was laundered and illegally taken out of Nigeria by a telecommunication company?

“Why has the government failed to recover the looted wealth of the nation, which has been traced to financial institutions in the West, and the United Arab Emirates?”

“Why has the CBN failed to recover the $7 billion deposit, and N600 billion bailout, given to the commercial banks in 2006 and 2008 respectively? Instead of intensifying efforts to recover such huge funds among several others, the government is determined to take a loan of $29.6 billion”.