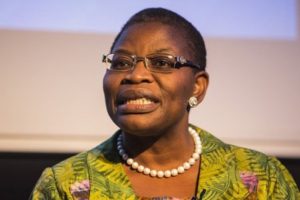 A former Minister of Solid Minerals, Mrs. Obi Ezekwesili, has accused the administrations of former President Goodluck Jonathan and that of the incumbent, Muhammadu Buhari, of leading Nigeria’s economy into recession.

According to her, the duo failed to adopt the right policies to deal with the crash in crude oil prices, which began in mid-2014, hence the ongoing economic crisis.

Ezekwesili noted that while Jonathan’s administration failed to do something about the impending recession before leaving office, the current administration equally failed to launch a comprehensive fiscal stabilisation programme on assumption of office in May 2015.

She spoke as the guest speaker at the inaugural Business Lecture of the Lagos Country Club in Lagos on Thursday night.

She said, “The parlous state of the Nigerian economy by the 29th of May, 2015 should have instructed an incisive and urgent macroeconomic stabilisation programme to realign the price levels in the economy. By May 2015, we knew we were already in trouble. As a matter of fact, we were already in trouble in 2014. That was the first time that growth collapsed to 3.8 per cent. The incoming administration should not have been told that we were weak and vulnerable.

“Had the government made quick and necessary adjustment that corresponded close enough to the level of impact of the 40 per cent decline in oil revenue, our story could have been different today. We would never have lost growth.”

The former minister, therefore, urged Nigerians to place a demand on the government to retrace its step and implement the right policies.

She said, “The record of the government today for timely and right actions on the economy is, however, so far not encouraging at all. For almost one year, the government delayed prime action on the fuel subsidy regime despite its aggravating import on fiscal imbalance.

“Over the same period, it delayed the right action on the exchange rate policy despite the deleterious effects that it was having on foreign reserves, the value of the naira, as well as on inflation. Before the government came on board, inflation level was nine per cent; today, inflation has doubled to more than 18 per cent. The greatest enemy of the poor is inflation. The greatest enemy of business is inflation. All you need in order to destroy the poor is total unstable price levels in an economy”