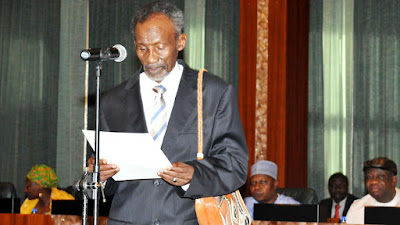 The former Chief Justice of Nigeria (CJN), Justice Mahmud Mohammed, on Thursday called for a constitutional amendment to reduce appeals to the Supreme Court.

The immediate past CJN made the call in his speech during a valedictory session organised for his exit from the bench.

Mohammed said the volume of appeals filed in the apex court was overwhelming.

“Permit me to re-iterate my comments made during the opening of the 2016-2017 Legal Year when I opined that our Supreme Court is arguably the most overworked in the World.

“This figure shows that nearly ten appeals were filed per week, most of which were interlocutory in nature.

Similarly, there were more than 5,000 outstanding appeals some of which have become academic in nature.

The log-jams are the result of a free-for-all appeals process, which has been given the imprimatur of our constitution. It was obvious that urgent action was required,’’ he said.

As an interim measure, the out-gone CJN said the court had taken measure to constitute a second panel to sit on Wednesdays in-addition to the normal sitting in Chamber slated for the same days.

“This additional Panel was a first in the history of the court and has certainly had a significant impact on the case disposal rate of the court. I will not take full credit for this success, as My Brother Justices rose to the challenge, but I recognise that this was a necessary response to the yearnings of all Nigerians for justice,’’ Mohammed said.

Besides, Mohammed said the country owed the judiciary a debt of gratitude for standing firm in the face of contrary winds that threatened to blow Nigeria’s democracy off course.

On alleged corruption rocking the Judiciary, Mohammed said he had tried to use the power bestowed on him as Chairman of the National Judicial Council (NJC) to restore the integrity of the judiciary.

The President of the Nigerian Bar Association (NBA), Abubakar Mahmoud (SAN), said the out-gone CJN would be remembered not just for his judicial pronouncements.

According to him, Mohammed will also be remembered as CJN who spear-headed some of the most innovative reforms in the Judiciary.

The immediate past CJN was born in Jalingo on November 10, 1946.

He had his early elementary education at Mallam Kasimu Koranic School and Jalingo Primary School between 1950 and 1956.

He completed his primary education at the Senior Primary School, Jalingo, between 1957 and 1959.