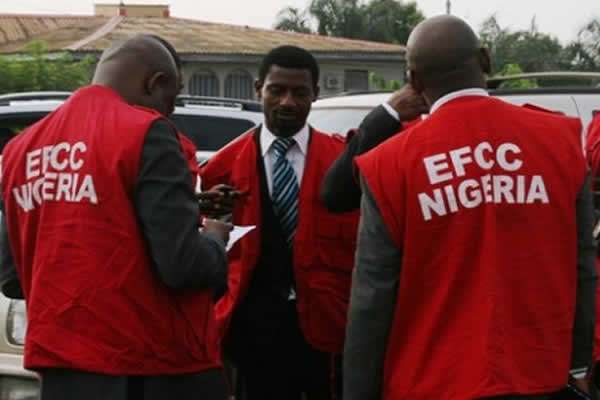 The EFCC also dismissed claims by the DSS that corruption is a matter related to national security.
The Economic and Financial Crimes Commission has criticised the Department of State Services for its poor handling of the corruption allegation against some judges of the Supreme Court.

The anti-graft agency said the allegations against the judicial officers were financially related, adding that the DSS had not business dabbling into the matter.

The two agencies were summoned by the House Ad-hoc committee set up to investigate the alleged invasion of the judges’ homes.
According to Daily Post, the EFCC Assistant Director (Prosecution), Ojogbane Jonson, who stood in for the Chairman, Ibrahim Magu said the DSS would have left the issue for them to handle.

He said, “It is a crime (corruption) motivated by greed, but it is within the purview of the EFCC.
“Bribery and corruption are for personal gain, and what it has affected in my view is not security, but development.


“It is not about the internal security, which the DSS runs, what it does is to rob us of our commonwealth.


“I am not aware of any issue they (DSS) have been involved in that has elicited as much criticism as this one. It is not much because people are against them fighting corruption but the methodology.”

The Chairman of the ICPC, Mr. Ekpo Nta, however supported the DSS’ action, saying


“The DSS, like the ICPC, have been conferred with the powers of the police.


“Section 6 of the ICPC Act, it is there. Just like the police, as they have it in the Police Act, these powers are there.”


In the early hours of October 8, 2016, operatives of the Department of State Services (DSS) invaded the houses of Justices Walter Onnoghen, Sylvester Ngwuta, Adeniyi Ademola and Nnamdi Dimgba