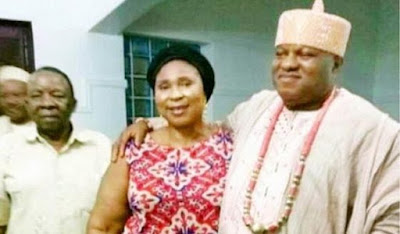 The Edo State Government has suspended the traditional ruler of Uromi (Ojuromi of Uromi) Zaiki Edenojie II, for one year over failure to apologise to the married woman he assaulted on Sept. 28.

A statement dated November 4th and signed by the Secretary to the State Government, Prof Julius Ihonvbere, said the monarch was suspended for failing to apologise within a stipulated period to Mrs Betty Okoebor, whom he was alleged to have assaulted, taking over the cattle market and stalls built by the operators of the cattle market, banning eight butchers from doing business in Uromi market, among other infractions.

His remuneration from the 5 per cent monthly FAC allocation to the LG shall also be appropriated and donated to orphanages during the period of suspension. The state government had initially suspended the traditional ruler for for 7 days. Days later, he reconciled with the woman and her her family members. The statement reads:

“It is instructive to note that in your “Letter of Apology” of 28th October, 2016, you trivialised the gravity of your misconduct by describing what took place in public glare on the 28th of September, where you were the assailant as an ‘altercation’ and ‘family affair’.

“The governor observed in your letter of apology that your activities since you were initially suspended from office as Ojuromi of Uromi have raised issues that require further determination.

“To ridicule the Edo State government and deride the directive that you apologise to Ms. Okoebor, you proceeded to organise a ‘forgiveness Session’ in your palace in your capacity as Ojuromi, wearing a crown even when you were still suspended from office, purporting to be ‘forgiving’ Ms. Okoebor.”

The statement added that government also received official security reports as to “high handedness in addressing relations with operators of the cattle market in Uromi to wit: unilaterally dissolve their association, appoint your preferred person to head the association and banishing their elected leader from Uromi.

“Others infraction are illegally taking over of the cattle market and stalls that they built themselves, banning about eight butchers from doing business in the Uromi market and assigning the responsibility for collecting revenue for the local government council to your own preferred person even without authority from the Council among other infractions. These are not the actions of a law abiding traditional ruler who believes in promoting peace, unity and development.

“In view of the facts established above, taking cognizance of your letter of apology that falls short of the public apology expected from you within the stipulated time, and the earlier suspension letter which had specified dethronement after seven days, the government of Edo State hereby commutes your dethronement to a one-year suspension from office as Ojuromi of Uromi in accordance with Section 28(1) of the Traditional Rulers and Chiefs Law (1979) with effect from November 7, 2016

“During this period of suspension under extant laws, you are hereby stripped of all the privileges and rights of the Ojuromi of Uromi and barred from performing any duty whatsoever in that regard. By virtue of this suspension from office, your remuneration from the five percent monthly FAC allocation to the Local Government shall be appropriated and donated during this period.”