Economic Recession: Father of two steals 12 wraps of fufu and pot of soup in Bayelsa (photo) 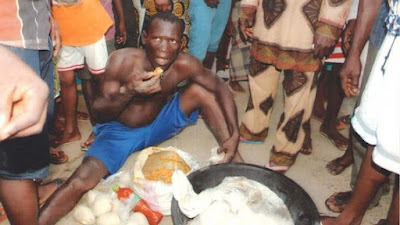 A 35 year old father of two was nabbed for allegedly stealing 12 wraps of fufu and a pot of soup from a restaurant in Igbogene, Bayelsa State. According to Guardian newspaper, the Igbogene vigilante group said they apprehended Kaduna Eradiri at about 2am on Thursday while sneaking into the restaurant to steal the food.

‘We were on patrol around 2:00am when we got to the Timida School area, we saw a man at a local food joint eating, we questioned the culprit and he confessed to have stolen’ a pot of soup, some wraps of fufu and half basin of garri. He claimed it was the economic hardship that led him to the heinous act.’
He was presented before the paramount ruler of the area, the Obenibe XI of Epie Kingdom, Hope Green Adike for intervention. Hope Green ordered that the father of two who claims he only committed the act to feed his children, parade the stolen items around the community, after which he was forced to eat it.

After the owner of the restaurant was contacted she simply said she had no money to take up the case to the Police, and will therefore allow him to go freely.