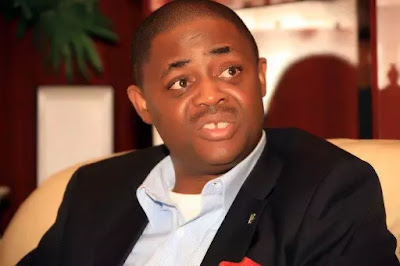 The former minister of aviation Femi Fani-Kayode has congratulated the President-elect of the United States of America Donald Trump. Fani-Kayode’s congratulation to Trump comes after his release from Kuje prison in Abuja on Monday, November 14.

According to kayode, i am sure Trump would not support religious extremism in the US or any part of the world

The former minister was remanded in Kuje following an order from Justice John Tsoho of the Federal High Court after he was arraigned by the Economic and Financial Crimes Commission (EFCC) for money laundering charges. Speaking to journalists at the court after perfecting a N50 million bail condition given to him, the former minister congratulated the Trump on his victory.


Fani-Kayode who has been an ardent supporter of Trump said the US, Africa and indeed Nigeria will benefit from the leadership of the new US President-elect. Supporting Trump, Fani-Kayode said the new American president-elect will not tolerate religious fundamentalists and human right abuses. He said: “It is going to be a tough fight finally we have somebody at th helm of affairs, the leader in the free world who would stand up to the extremists in the Middle East, Africa and Nigeria an he will bring force to bear.”

“I also believe the violation of human rights in countries outside America will also be frowned upon by the incoming president. “I also believe that he will not allow America to support some of those president’s or Presidential candidates throughout the world who have a history of espousing Islamic fundamentalism.

I don’t think he will allow people to just kick others around. That is why I supported him from day one. “But if you want to know more please read my essays an you will find out more.” Also speaking on his detention both at the EFCC and Kuje prison, the former minister said he was not deterred in facing the charges against him. He also said he was already used to being detained by the anti-graft agency. “Well, I’m used to it,” Fani-Kayode said with a smile.

“I am used to detention. I was detained for 76 days and I survived it. I spent another 24 days- that means three months of detention without having been convicted of any crime,” he said. “What I can say is that he that is in me is greater than he that is in the world. Those that are with me are greater than those that are against me. No weapon fashion against me shall prosper,” the former minister added.