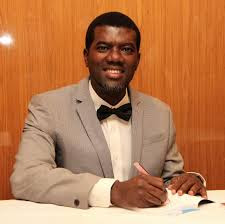 Reno Omokri, former special assistant to ex-president Goodluck Jonathan on New Media, has mocked President Muhammadu Buhari on the time it took him to name his cabinet members. Reacting to US President-elect Donald Trump’s decision to name some of his cabinet members even when he hasn’t been sworn in, Omokri described Trump’s presidency as the real change.

President-elect Donald J. Trump on Sunday, November 13, chose Reince Priebus, the chairman of the Republican National Committee and a loyal campaign adviser, to be his White House chief of staff. In selecting Priebus, Trump passed over Stephen K. Bannon, a right-wing media provocateur. But the president-elect named Bannon his senior counselor and chief West Wing strategist.

Omokri went ahead to compare Buhari to Trump saying: “Trump’s presidency is the real change and not the reverse change promised by someone.” Although Omokri didn’t mention name, it was apparent he was referring to President Buhari. He wrote on his Facebook page: “Donald J. Trump has not even been sworn in, yet today (November 13), he named some members of his cabinet. “That is real change, not the reverse change promised by someone who waited for 6 months after his swearing in before naming his cabinet consisting of an Agriculture minister who studied French and other misfits.”