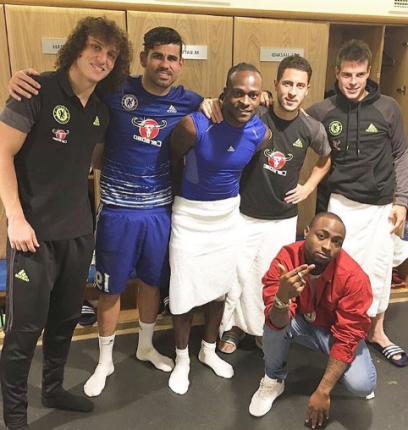 The singer was seen a group picture with some Chelsea FC players in their locker room after the game against Tottenham Hotspur.

Davido showed his sporty side when he was pictured hanging out with Victor Moses and other Chelsea FC players following the team’s win against Tottenham Hotspur.
The singer posted an image of himself alongside Eden Hazard, Diego Costa, David Luiz, César Azpilicueta and Moses.
play

He ended his post with the caption “Great game”, which is no doubt the best expression for the London derby.
Even in a crouching position, Davido still managed to bring his fresh super star demeanor into the picture.
Victor Moses scored the winning goal for Chelsea and ended Tottenham’s unbeaten runplay

Chelsea FC won Tottenham at Stamford Bridge on Saturday, November 26, 2016 with a goal margin.
This extended their lead on top of the English Premier League table