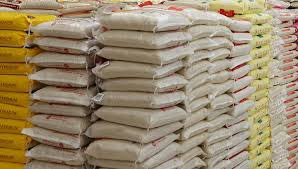 Men of the Ogun State Area Command, Nigeria Customs Service, have made a shocking discovery after intercepting a petroleum tanker.

The officers were shocked to discover that the tanker was loaded with smuggled bags of rice. This was revealed by the new Area Controller, Hassan Gangua while addressing journalists at the command’s Idiroko border office on Thursday. According to him, a MAN diesel petroleum tanker with number plate FST 51 XE, was specially built for smuggling. He said the tanker, filled to capacity with the smuggled rice, was intercepted by customs operatives of the command on Monday November 15, 2016, along the Idiroko border axis on its way to Lagos.

“This interception was made by our gallant officers 24 hours after my arrival,” he said. He also revealed that another 25 cars with built-in compartments, also loaded with bags of smuggled rice, were also intercepted in the same axis. Similarly, the Area Controller said another trailer allegedly carrying about 500 bags of rice was intercepted along Lagos-Sagamu interchange on Monday, November 21, 2016. He also said in the last one week, four vehicles loaded with 4,000 cartons of frozen poultry products and 19 motorcycles used for smuggling of rice were intercepted. According to him, the poultry products have been destroyed.