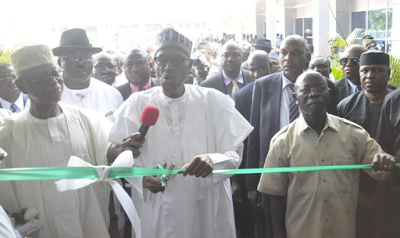 Benin City – President Buhari  Monday commended the Edo State Governor, Adams Oshiomhole, on the account of sacrificing his personal comfort to provide essential services such as building a hospital for the citizens of the state instead of building a government house.

The President who spoke during the commissioning of the new Central Hospital in Benin, as part of his two-day official visit to Edo state, said that the realisation of the new project by the state government was the best thing to do and was better than building a new government house in the state. He, however, expressed his satisfaction on the new project saying that the new health facility would not ‎only discourages medical tourism by Nigerians but will also ensure that the masses received better health care services in the state:

“I am very impressed with this work (hospital). I respect his (Oshiomhole) sacrifice of his personal comfort. Instead of building a government house, he decided to build this hospital. I think it takes courage to do what he did. I thank the governor for making his presence in Edo State go into history.”

However, the out-going governor, Oshiomhole, has on his part expressed his belief on the fact that a medical facility should not be something to be found wanting by the less privileged, he therefore noted that ‎rather than spend huge resources for the benefit of the government and its officials, his administration deemed it rather appropriate to channel the effort towards constructing a hospital.