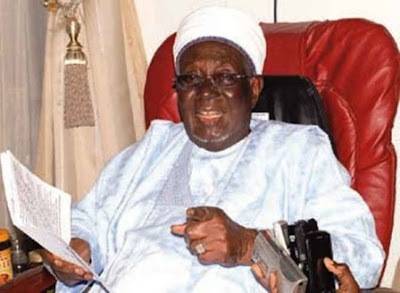 The former Sultan of Sokoto, Alhaji Ibrahim Dasuki is dead.

The late Sultan, who is the father of embattled former National Security Adviser, Col. Sambo Dasuki (Rtd), died on Monday at the age of 93 after a protracted illness.

The Secretary, Sultanate Council of Sokoto, Alhaji Umar Faruk confirmed the death of the former Sultan in a statement he issued in Sokoto on Monday night.


It said that the remains of the late former Sultan would be buried at the Hubbaren Shehu, Sokoto,  after the afternoon prayer (Zuhr) on Tuesday.

The statement added that, the funeral prayer of the late Dasuki would be conducted at the Sultan Bello Juma’at Mosque in Sokoto.

The late Sultan was deposed in 1996 during the military government of late  General Sani Abacha.

Prior to becoming the Sultan, he held the traditional title of Baraden Sokoto.

Dasuki was the first Sultan from the Buhari line of the House of Dan Fodio.