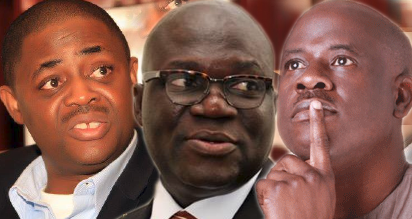 On Monday, October 31, 2016, the highly revered Catholic Bishop of Sokoto Diocese, His Lordship, Bishop Matthew Hassan Kukah, paid a visit to the trio of Chief Femi Fani-Kayode, Musiliu Obanikoro and Dr Reuben Abati in EFCC custody. On his arrival there, he met them at the clinic and afterwards had some private moments with them away from the prying eyes of journalists. 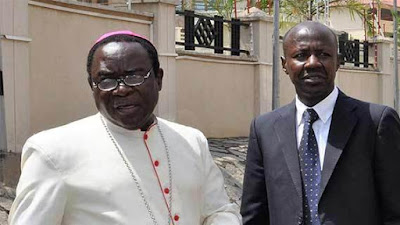 Bishop Kukah spoke inspirational words of encouragement to the trio wherein he encouraged them to be strong and see this as a trying period for them. He prayed for them before departing.
It was therefore very shocking to us to read that the Commission’s spokesman, Wilson Uwujaren, released a press statement wherein he alluded a lot of things supposedly said by the Catholic cleric and wove disheartening lies around them.
Even if we decide to agree that Kukah said the clinic and detention area of the commission was ‘clean and orderly’, we reject the notion that Kukah said the trio was ‘cheerful’. This was obviously added to make a caricature of the seriousness of the condition of the detainees. What is there in EFCC for anyone to be cheerful about especially when someone is being illegally detained.
It is all part of EFCC’s deliberate and wicked manipulation of the media against the trio who were met at the EFCC clinic by the bishop while undergoing some medical attention to say that they were cheerful.
Also, that some of EFCC’s facilities were reportedly said to be ‘clean and orderly’ does not give them the liberty to illegally detain Nigerians for as long as they wish. Even if EFCC converts a five-star hotel to its facility, it can never be good enough to illegally keep citizens on account of their political leanings.
For the avoidance of doubt, we wish to reiterate for the umpteenth time that the EFCC is holding Chief Femi Fani-Kayode illegally based on the following events:
1)      His re-arrest at the premises of the Federal High Court, Ikoyi, Lagos on the 21st of October was done without a warrant
2)      The arrest was done after the presiding judge on the day’s matter had advised that it would be unwise to re-arrest a man who had honoured their invitations, had been on bail from both EFCC and the courts, has never been declared wanted and had appeared in court of his own accord
3)      He has been held for close to two weeks without even their usual questionable detention order which they used in holding him earlier for 67 days
Rather than feed Nigerians with a new mundane ‘clean and orderly’ campaign at the expense of more serious issues bordering on illegal incarceration of citizens based on their opinions on national matters, Uwujaren and his paymasters should tell Nigerians why they have allowed themselves to toe the path of this administration’s vindictiveness, vengeance, vendetta and persecutions rather than diligent prosecutions according to our laws. Until then, visits of people like Bishop Kukah would remain a constant reminder to them that power is transient and that light can never overcome darkness.
Signed:
Jude Ndukwe
SA (media) to Chief Femi Fani-Kayode
November 1, 2016
Advertisements
news