BIAFRA Struggle: Court decides the bail of Nnamdi Kanu and 3 others 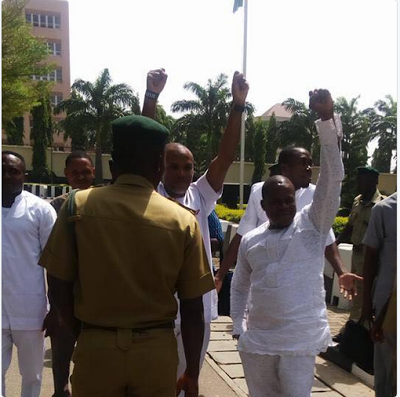 Justice Binta Nyako of the Abuja Division of the Federal High Court, yesterday, fixed December 1 to decide whether  Nnamdi Kalu, the detained leader of the Indigenous People of Biafra, IPOB, should be released on bail, pending his trial, or not.

According to Vanguard, the court said it would also consider the merit of separate bail applications by three other pro-Biafra agitators, Mr. Chidiebere Onwudiwe, Benjamin Madubugwu and David Nwawuisi, who are facing trial alongside Kanu.
The four defendants are answering to an 11-count charge bordering on treasonable felony and their alleged involvement in acts of terrorism. Specifically, the Federal Government alleged that the four conspired to commit treasonable felony contrary to and punishable under Section 516 of the Criminal Code Act, CAP. C38 Laws of the Federation of Nigeria, in 2014. Government alleged that they committed the offence along with others now at large, on diverse dates in 2014 and 2015, in Nigeria, London and the United Kingdom.


Meanwhile, at the resumed sitting yesterday, the defendants, who are currently at Kuje Prison, through their respective lawyers, urged the court to release them on bail pending the determination of the case against them. Whereas Kanu moved his bail application through his lawyer; Mr. Ifeanyi Ejiofor, Onwudiwe was represented by Mr. I. Adoga, while Madubugwu and Nwawuisi were represented by Mr. E. I. Efeme and Mr. Maxwell Okpara, respectively.

However, government lawyer, Mr. Shuaibu Labaran, vehemently opposed the release of any of the defendants on bail, insisting that they would constitute “a threat to national security

Meanwhile, the family members of the IPOB leader, Mazi Nnamdi Okwu Kanu, have accused the international media outfits in the world, particularly Cable Network News, CNN, and British Broadcasting Corporation, BBC, Aljazira and other media companies of being bias against their son Mazi Kanu and the struggle for Biafra actualization.

In a statement signed by Prince Emmanuel Okwu Kanu for the family; it described the current court case situation of Nnamdi Kalu as unfortunate, in that the media outfit that are supposed to be resolute in educating the people of the world on truth turned its back to stab the truth. 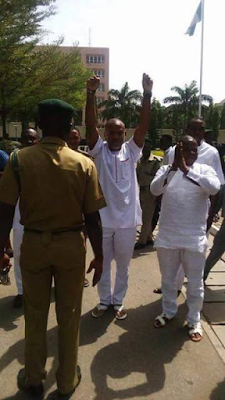 “It is unfortunate that CNN, BBC and other international media companies that suppose to be resolute in educating the people of the world on the truth turned back and stab the truth. The CNN and BBC were paid by the Obama government and British Government not to air news concerning Biafra struggle and Nnamdi Kanu, which is not fair, Aljazira was a bit fair for the news of Biafra and for the release of my brother Mazi Nnamdi Kanu who is being incarcerated since one year and some more months now.
We the members of the family are worried on why the international media outfits in the class of CNN and BBC cannot tell the entire world the truth instead they were allowed to be bought over by evil people in the world, we do not believe before now that outfits like CNN and BBC can be so cheap and loose to the level that they will not proves the ethics of journalism. However, they fail to understand that people around the globe believe in their news before, but today they are no more relevant in the face of general public because of their lies, people believe more on tweeter messages, Facebook and other social media outlets and newspaper reports now.
With this, very soon Radio Biafra will build an international media outfit, if it is not already in that class, that will compete with the compromised international media outfits like CNN and BBC.
The Obama administration recognize, defend and support Muslims in the world in everything more than the Christians and he and his administration collaborated with the CNN and BBC in every evil committed by the Muslims. the American and British ambassadors in Nigeria were also in collaboration with the BBC, CNN and Muslims to kill unarmed members of IPOB who were massacred in a cold blood in different cities in Nigeria and the support for the illegal detention of Mazi Nnamdi Kanu and other IPOB members detained illegally in all the prisons and security cells in Nigeria.

The ambassadors in their support for senseless killings of IPOB members by the security agents in Nigeria but for one day have never condemned the killing, is a clear indication that they are aware of the barbaric attitude of security agents in Nigeria. It is imperative to let the people of the Nigeria and the world to know that Nigeria is never one nation and cannot be one because it is nations with different value system before amalgamation in 1914 and we ask these three nations of Arewa, Oduduwa and Biafra to ask themselves this question, ‘who are you before amalgamation in 1914?’ you must trace your origin before it is too late.”