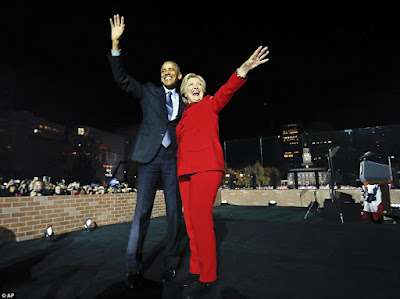 Michelle and Barack Obama who stole the show at Hillary Clinton’s night in Philadelphia Monday night.

The outgoing First Couple stepped up before a packed-out crowd of thousands in Independence Square, outside the very building where the Declaration of Independence was signed, to reflect on the past eight years and to look forward to a promised future of hope and prosperity – pending a Clinton presidency.

The crowd had already been warmed up by music from Bruce Springsteen and Jon Bon Jovi, and a speech by Bill Clinton, but even that build-up wasn’t enough for the emotional heights that Michelle Obama reached in her time on the podium.


Mrs Obama has become quite the professional orator – and arguably Team Obama’s MVP – over the past few months, but her voice quavered as she opened up her speech.

‘This truly an emotional moment for me for so many reasons,’ she said. ‘First we are one day away from one again making history. Tomorrow we have the chance to elect someone who is singularly qualified to be our president: our friend Hillary Clinton.’ 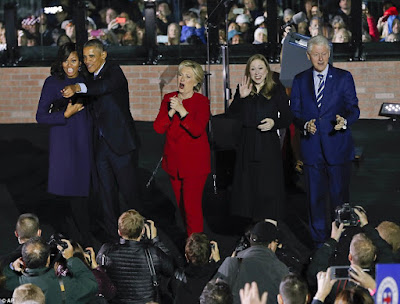 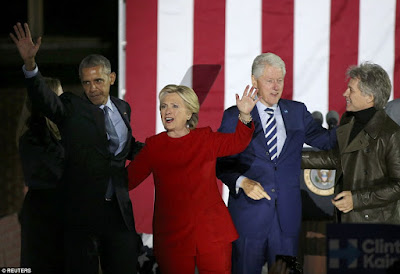 She gave a dramatic sigh as she went on to roll out a list of Clinton beneficiaries – with a particular focus on mothers and kids – and Clinton’s qualifications both as a politician and as a parent.

But a big reason for her heightened emotions was, she said, because ‘speaking here tonight is perhaps the last and most important thing I can do for my country as First Lady’.
It was the first in a series of remarks Monday night that set up Clinton as the successor to the Obama legacy. 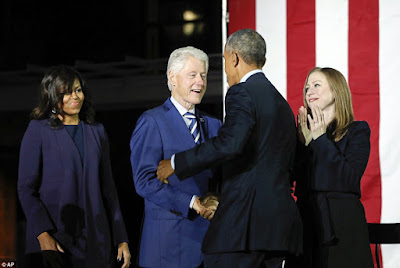 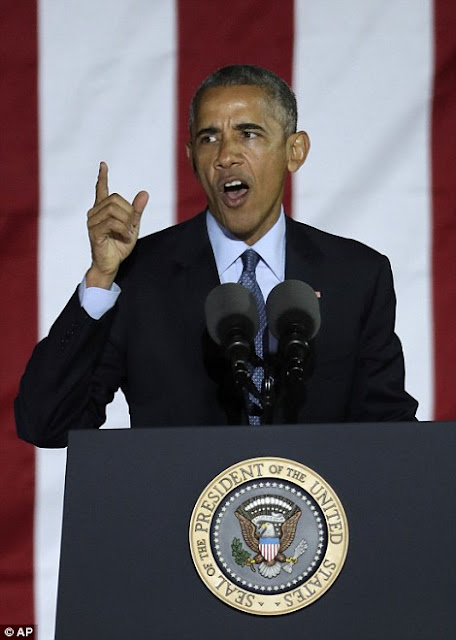 Details of her speech:

Before carrying on, however, Mrs Obama took time out to thank the viewers – always a smart move to get the crowd on-side – for welcoming her and The President into their homes and communities.

‘Every day you have inspired us with your courage and your decency, and every day we have tried to make you proud and live up to the standard of citizenship that you set.
‘Because we know that our words and actions are a reflection to the world of who we are as a nation, and more importantly our actions are a reflection of what behavior we hope our children will emulate, and we believe that our responsibility to you does not end when we leave the White House.’

Trump wasn’t invoked by name, but his shadow was on the wall as Clinton spoke of deserving a leader ‘who will ensure that our daughters are safe and respected and that our sons understand that truly strong men are compassionate and kind’

The list of Clinton’s positives were clearly designed to illustrate by absence Trump’s negatives: Mrs Obama called for someone who would celebrate diversity, unite parties, races and classes, and see all people as ‘infinitely worthy, all an important part of this great American story.’
Clinton was that candidate, she said, as the audience whooped and cheered.

‘Tomorrow with your vote you can stand up to those who seek to divide us and make us afraid,’ she said, revving up her engines for the climactic push. ‘You can declare with one voice that we are always stronger together. 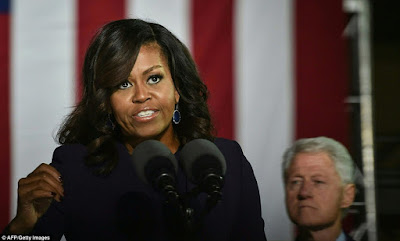 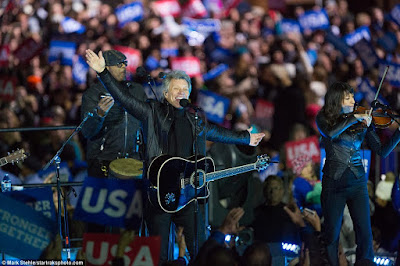 ‘Tomorrow with your vote you can say that this country has always been great, that it is the greatest nation on Earth, a country where a girl like me from the South side of Chicago, whose great, great grandfather was a slave, can got to some of the finest universities on earth.
‘A country where the biracial son of a mother from Hawaii and the son of a single mother from Hope, Arkansas, can both make it to the White House.

‘A county that a young woman determined to do all the good she can, can do on to break the highest, hardest glass ceiling and become President.’

It was their duty, they said, to hand over the country ‘to a leader that we believe we all can trust.’
Barack Obama makes final push for Hillary Clinton in Philadelphia.

Those lines, of course, setting up a line of succession from Clinton to Obama and back to Clinton, while setting up ‘first female President’ as the logical progression from ‘first black President’ – not something that will appeal to dynasty-hating voters or a big chunk of the Trump crowd, but in the moment a stirring piece of rhetoric.
‘That is… the history you can make tomorrow, but only if we get out and vote for Hillary Clinton,’ Mrs Obama promised.

Then she took it down a gear, as she welcomed her husband to the stage. ‘I’d like to take a moment to say how proud I am of all he has done for this country,’ she said to cheers.
‘I’m proud not just of what he has done but how he as done it – getting the job done in the face of unimaginable challenges, always going high when they go low.’
‘Ladies and gentlemen, I introduce to you the love of my life, the President of the United States: Barack Obama.’

It was a heck of an introduction, but the President kept the energy way up by enjoying a little call-and-response before thanking his wife for being ‘my love, my rock and an amazing First Lady.’
Then the Obama Family double-feature was into its second act, with Obama evoking the halcyon days of his first election – the days of ‘Yes we can’ and ‘The Audacity of Hope’ – as part of his victory lap. 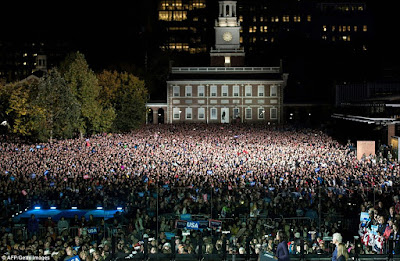 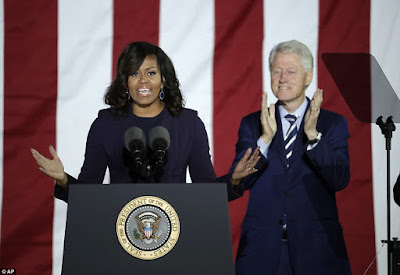 ‘Eight years ago I asked all of you to join me on  an unlikely journey,’ he began. ‘We set out not just to change programs or policies,’ he said, but to reform Washington to give a louder voice to voters; to inspire the world with US ideals; and to ‘shape a changing America so that everybody belongs and everybody has… a responsibility.’
Before dissenting voices could question how much of that was achieved, he segued into the problems faced by his administration: economic disaster, and ‘in some cases unprecedented obstruction and a cynical Washington.’
‘But we stayed with it,’ he said. ‘We stayed with it. And because of your resilience, because of your strength, because of your faith, we turned “Yes we can” into “Yes we did.”

‘Look at the road we’ve traveled,’ he continued, pointing to 15.5million new jobs, a ‘resurging’ auto industry that’s ‘lead the fastest manufacturing growth since another Clinton was President’, and rising incomes, falling poverty and ’20million more Americans [having] health insurance.’

Reduced pollution, marriage equality and soldiers brought back from war were namechecked too.

‘Because Bill Clinton is here,’ he said, ‘I did some math, a little arithmetic,’ that added up to ‘jobs going up by more than 30million’ under the last two Democratic presidents, with deficits down and millions more Americans getting health insurance

Meanwhile the last two Republican president saw ‘basically flat’ job growth and rising deficits, he said.
‘So yes, with Democrats in charge, America is stronger,’ he said ‘Those are just the facts.’
Building on the themes of succession and progress set up by Michelle Obama, he promised that ‘smart, steady, tested’ Hillary Clinton would carry that same torch he and Bill Clinton had carried.

But unlike Michelle, Obama was willing to namecheck Trump himself, calling him ‘uniquely unqualified’ to handle the economy, a threat to ecological and financial regulations, liable to start a trade war and at risk of putting millions of Americans out of work.

Trump would be a terrible Commander in Chief, too, Clinton said: he ‘lacks a basic understanding of the world, justifies torture, suggests abandoning our allies.’
And then he pulled out a new jibe that he’d tried out to great success Sunday, referencing a New York Times story that revealed Trump’s had been kicked off his own Twitter account by his advisers for fear that he would ruin his own campaign.

‘Over the weekend his campaign took away his Twitter account,’ he said to chuckles from the crowd, ‘because he’s erratic. If his closest advisers don’t trust him to Tweet, why would any of us trust him with the nuclear codes?’ he asked to cheers and applause.

‘Anyone who sees women as objects, minorties and immigrants as threats, other faiths as presumtively un-American, cannot lead this diverse, big-hearted nation that we love,’ he said.

And then he switched up tack, going from reasons not to vote, for reasons to pick ‘outstanding’ Clinton.
‘I’ll be honest, I’ve had to bite my tongue’ when hearing the ‘vicious, crazy attacks’ and ‘double standards applied to her’ Obama said – especially as Republicans commended her turn as Secretary of State, he said.

‘I agreed with Republicans then,’ he said, ‘she’s a reason why we’re so respected around the world.’

But they tore her down because it was ‘politically expedient,’ he said – and despite the withering attacks, ‘she doesn’t complain, she doesn’t buckle, she brushes it off. Like the American people she is strong and tough and she knows that government service isn’t about her, it’s about you.’ 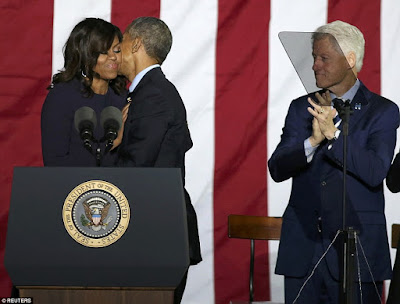 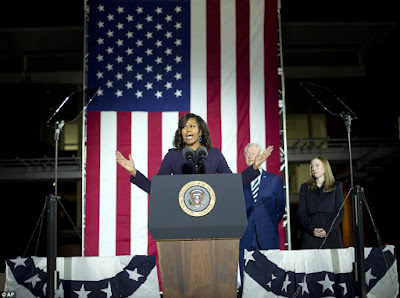 She would work her heart out for the voters, she said – children, mothers, students, immigrants, ‘everyone who has not yet felt the progress of these last eight years – she will work, she will deliver, she won’t just tweet.’
That line got laughs, but when Obama told voters to pick Democrats down the ticket, too, and elect would-be Senator Katie McGinty, he – or rather she – got boos.
Obama stirred up a chant of ‘Katy! Katy!’ to drown out the haters, but the discontent was still there. His pleas to help give Clinton a Democrat Senate may have fallen on deaf ears – in Philadelphia, at least.

That didn’t stop the great orator, however, as he pressed on with a story about being asked whether he now doubted the idealism of his 2008 run.
‘I still believe in America,’ he said. ‘I have seen again and again your goodness, your strength and your heart.
‘In 2008 you gave me a chance – a skinny guy with a funny name and for these past eight years I saw how hard you work in the face of impossible odds,’ he said.

‘I saw the values you teach your children, I saw the way you trust strangers in need, I’ve seen the young men and woman in uniform who meet every mission and the military families who serve and sacrifice just as well, and the wounded warriors who never, ever quit.
‘You bet on me all those years ago and I will always be grateful for the privilege you gave me to serve but I will be honest with you: I’ve always had the better odds, because I’ve always bet on you.

‘And America, I’m betting on you women more time,’ he said, before calling on disparate corners of American society – moms, dads, conservatives, young people and African-Americans – to draw on their better nature and vote for Clinton over a litany of Trump’s defects.
Hillary Clinton makes a final appeal to voters at a Philly rally.

‘I’m betting you will reject fear and choose hope. I’m betting that the wisdom the decent and generosity of the American people will once again win the day. And that’s a bet that I’ve never, ever lost.’

With the audience high on self-congratulation, Obama masterfully swept them Clinton-wards, promising her to be ‘this fighter, this statesman, this mother, this grandmother, this patriot – our next President of the United States of America – Hillary Clinton!’

He slammed the podium and grinned as the audience, whipped up into raptures of starry-eyed excitement, cheered and howled and drowned out Clinton’s own entrance music.
Whether the spell he weaved will last till tomorrow remains to be seen – but as a sign-off from this President, it couldn’t be beaten.

Spain records its highest number of deaths in new Coronavirus