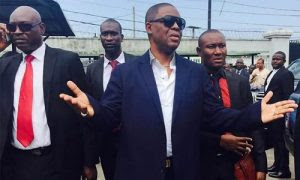 We read with deep regret, the purported rebuttal by EFCC spokesman, Wilson Uwujaren, on our concerns raised about Chief Femi Fani-Kayode’s health condition while in the custody of EFCC. We had made known to the public the fact that the former minister of culture and tourism slumped on Saturday, 22nd of October, 2016, owing to a health condition which he has been treating since his unfortunate prolonged incarceration by the anti-graft agency.In fact, it was one of the Commission’s agents who saw the incident and raced to Chief Fani-Kayode’s assistance after which he was rushed to the clinic in the EFCC complex where he was promptly attended to.

Since then, the former director of media and publicity of the 2015 PDP Campaign Organisation has been reporting to the clinic on a daily basis as required by the doctors for continued checks.More so, Fani-Kayode’s doctors have since sent in a record of his medical history to the EFCC for their information and guidance.It therefore beats our imagination that the anti-graft body’s spokesman is not abreast with what is happening within the four walls of his organization. This simply shows that Mr Wilson Uwujaren lacks the basic capacity to run an office as simple as that of an organisation’s spokesperson.Apart from being ridiculous and childish, we find Uwujaren’s claim that the concerns we raised in that statement was “dubious and attention seeking alarm” as not only unintelligent and pernicious but also a reflection of the organization’s staffing capacity which we consider as largely perfunctory.Those who wish to verify our concerns can visit the Abuja Head Office of EFCC and find out things for themselves rather than rely on a spokesperson whose verification processes of events in their Abuja Head Office is obviously based on hearsay. We urge members of the public to discountenance the purported rebuttal and treat is as a product of disinformation.While we concede that indeed Fani-Kayode and Obanikoro shared jokes together on Monday, the incident in question happened the previous Saturday. We are alarmed that Uwujaren does not know this! Unless Uwujaren wished that Fani-Kayode should not have been revived, we see no reason why he should not share jokes with anyone the following Monday. The jokes he shared not only with Obanikoro but also with many around him including operatives is only a reflection of the fact that Fani-Kayode has remained his usual self despite being persecuted.However and once again, we call on all those who have anything against Chief Fani-Kayode to follow the due process and keep a date with him in court as he is very much willing to put an end, through legal means, to this charade baptized as anti-corruption fight rather than them using extra-judicial means and tactics to dehumanize him simply because of his frightening yet very popular and truthful opinions on the state of the nation.Lastly, we reiterate our earlier position that no harm must come the way of the former minister who has come to be seen by millions of the oppressed, the downtrodden and all victims of tyranny and executive highhandedness as a symbol of truth, hope and liberation.Jude NdukweSA (media) to Chief Femi Fani-Kayode25th October, 2016