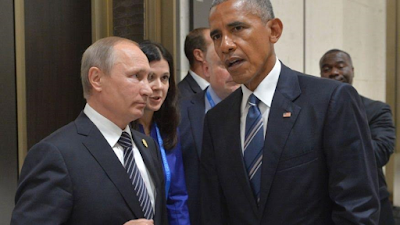 The US on Monday revealed that it is “suspending its participation in bilateral channels with Russia” saying Russia has failed to keep up to it’s part of the cease fire agreement in Aleppo, Syria.

According to the US, all it’s relations with Vladmir Putin’s nation has been suspended, a decision they didn’t take lightly.
In recent days, Russian and Syrian aircraft have carried out attacks in Aleppo, using bunker-busting bombs, incendiary munitions, cluster bombs, barrel bombs and thermobaric bombs, which scatter a cloud of explosive particles before detonating in devastating blasts, according to American intelligence officials.

“This is not a decision that was taken lightly,” United State Department spokesman John Kirby said in a statement. Everybody’s patience with Russia has run out,” White House Press Secretary Josh Earnest told reporters Monday while addressing the decision.

According to the statement, US military and civilian personnel that were sent to Geneva, Switzerland, to work with the Russians on the Joint Implementation Center for the Aleppo ceasefire will now be withdrawn and sent home.
Earnest said

”Russia had lost credibility by making a series of commitments without any indication they were committed to following them,” saying Russia and its Syrian regime allies tried “to bomb civilian populations into submission. Their unwillingness to uphold the cease-fire accord was demonstrated by their intensified attacks against civilian areas, targeting of critical infrastructure such as hospitals, and preventing humanitarian aid from reaching civilians in need.”

When asked if the U.S kept to their own side of the deal in the ceasefire agreement, State Department spokesperson Elizabeth Trudeau said ‘we believe we did’

“Cooperation over Syria was the Obama administration’s last and best shot for arresting the downward spiral in the bilateral relationship with Russia,” said Andrew S. Weiss, a former White House expert on Russia who is vice president for studies at the Carnegie Endowment for International Peace. The mistrust and hostility toward the United States by the Russian leadership is real and growing. It is going to be the driving force behind Russian external behavior for many years to come.”