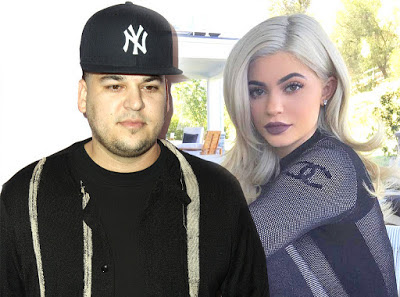 “Chyna’s in bed with me,” Rob said while calling into On Air With Ryan Seacrest on Friday.

He has apologized to his sister, Kylie Jenner for tweeting her phone number to the world when he got angry and accused his family of failing to invite Blac Chyna to a baby shower they were planning for him. He realized that the family had a separate baby shower for Chyna after he struck out at his family without talking to them first.
He said:

“I kind of took all my anger out on Kylie and my family. It wasn’t just Kylie, it was my whole family. I went in on them on group text. And I was just being petty and posted Kylie’s number.
I was like, ‘Yo, it’s not that serious. We change our numbers all the time.”
“We all love each other and we’re all family and I never want to beef or argue with anybody,” he said.

He said what his family does is never just for the cameras. These are “all real issues that are actually happening. It’s so many siblings that it’s hard to communicate with everybody, honestly.”

Then he apologized his sister on air saying:
“I’m sorry, Kylie, if you’re listening”. “I love you, Kylie.”