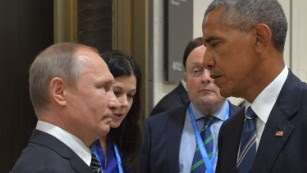 The Russian President appears to be genuinely afraid of Clinton Evidence is growing that Russia is actively working to undermine Clinton’s presidential prospects. When hackers released the emails of the Democratic National Committee just hours before the Democratic National Convention, internet security specialists found the fingerprints of Russian agencies. Then came the latest hacks of Clinton campaign chairman John Podesta.

Though Donald Trump and Vladimir Putin seem to agree on a number of issues, there is one they apparently don’t see eye to eye on. While Trump argues that Hillary Clinton is too weak to be president of the United States.

The US government has now formally accused Russia of interfering in the US elections, and every instance of interference so far is clearly aimed at harming the Democratic candidate.
It’s easy to see why Putin fears Clinton. While the Trump campaign is trying to get voters to focus on Clinton stumbling and coughing, Putin sees her as a real threat to his objectives.

Putin’s personal animosity toward Clinton coincides with his larger strategic goals. In recent years, he has launched an increasingly muscular foreign (and domestic) policy. He is challenging the US, NATO and the European Union at every turn. Despite a shrinking economy — not much bigger than Mexico’s — Russia has used its military power to make it a major player on the global stage.

For Putin, stopping Clinton is not only an important strategic goal. It is also personal.

Back in 2011, Putin faced the biggest protests the country had seen since the collapse of the Soviet Union. He had served two terms as president, the maximum allowed, and in 2008 had become prime minister, in a maneuver that allowed him to effectively hold power while his ally, Dmitry Medvedev, was president. Then he announced — to much anger, but little surprise — that he would seek a third term as president. Three months later, the opposition erupted in fury when his party won a landslide victory in legislative elections amid allegations of fraud.

Despite the frigid Moscow temperatures, thousands massed in the streets calling for fair elections and for an end to Putin’s seemingly endless rule. Signs and chants declared, “Putin is a thief!” Putin’s hold on power faced a genuine threat. Then-Secretary of State Clinton openly sided with the protesters. “The Russian people, like people everywhere,” she said, “…deserve free, fair, transparent elections.”

Putin was fuming. He blamed the protests on Clinton, accusing her of sending “a signal” to the opposition

The most urgent item on the foreign policy agenda for both the United States and Russia is the civil war in Syria. There, the Trump campaign has offered conflicting ideas, but in the most recent debate Trump seemed to stand with Putin.

While Obama has maintained an extremely restrained approach to the crisis, sending Secretary of State John Kerry to multiple, so far useless, diplomatic marathons with his Russian counterpart even as Russia continues bombing civilians in support of Assad, Clinton sounds determined to impose a no-fly zone, which would defy not only Syria’s army but also Russia.