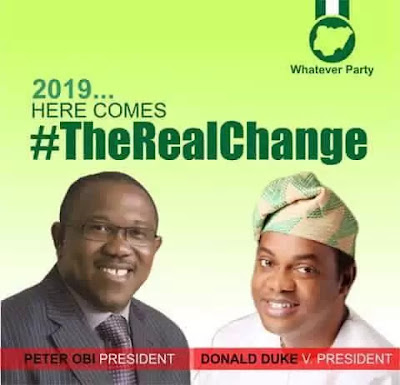 The former governors Peter Obi and Donald Duke as Presidential candidates for 2019 election has gone viral on the social media.

However, is likely that the two politicians have no idea of the poster and slogan.

Here are some statement on social media:

Peter Obi + Donald Duke candidacy for 2019? Buhahahahahaha in this Nigeria that is balkanized like this? — KoloKK | #SocialGood (@KoloKennethK) October 5, 2016

Peter Obi for president Donald Duke for vice Atiku: These people are not just loyal at all Runs Men: Either way, we are coming back! — SoulJah (@jeffphilips1) October 5, 2016

Why not donald duke the president Peter obi vice president.. But I will still vote for them as far my Duke is there. https://t.co/FheblqGheZ — Nkem (@CuteTgurl) October 5, 2016 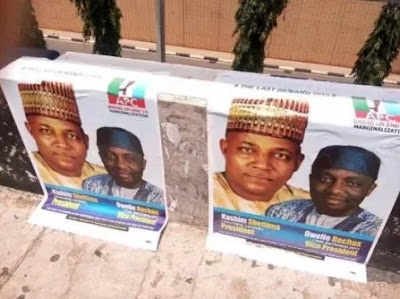 In recent development, APC presidential campaign posters bearing the faces of Kashim Shettima and Rochas Okorocha had been spotted in Abuja.

ALSO READ How Imo State Govt. Abandons Huge Refuse Dump on The Road to “get back at Owerri people who have been battling the state government over the relocation of the market”

Notwithstanding, Governor Okorocha rejected having anything to do with these posters and supposed that it was another mischief by some elements cowed by his monumental achievements in Imo state.