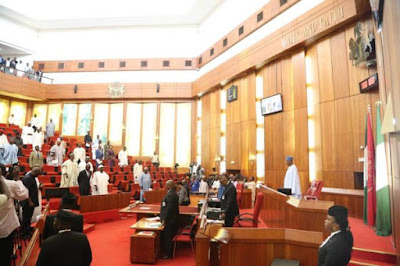 The Nigeria Senate, urged the Departement of State Services (DSS) and all anti-corruption agencies to always comply with the provisions of the law in the exercise of their duties, particularly while prosecuting the anti-graft war.

According to Chairman of its Committee on Media and Public Affairs, Senator Aliyu Sabi Abdullahi stated that the Senate expressed its support for the war against corruption which is one of the cardinal programmes of the Buhari administration but warned that all actions taken outside the provision of the law in pursuit of the war will be a contradiction.

The Red chamber also directed its Committee on Judiciary and Human Rights & Legal Matters to look into the case and report back in four weeks.

We cannot in any circumstance accept a situation where extra-judicial and illegal means are employed to pursue any state objective. Any strategy employed in pursuit of the anti-corruption war that offends or is contrary to rule of law or seek, appear or is perceived to compromise the independence of the judiciary is unacceptable to the Senate.

Once again, we need to remind all agencies of government not to operate outside the mandate provided for them by the law of the Federal Republic of Nigeria. Any action contrary to the law will give a bad impression of our country to the international community,” the Senate stated.