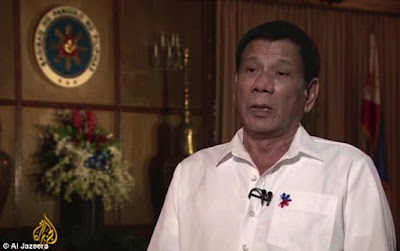 Philippine President Rodrigo Duterte was sexually abused as a child by a Catholic priest, a traumatic experience which now drives his bloody war on drugs.

He claimed he was ‘fondled’ by a priest in the late 1950s, while attending the Jesuit-run Ateneo de Davao High School.
At the same time he made the suggestion that he was not the only one to have fallen victim to his attacker, but said he did not report the abuse out of fear.

In his first interview since taking office 100 days ago, President Duterte told Al Jazeera that his tumultuous childhood shaped his current beliefs and policies.
‘It’s what you get along the way that shapes your character’.

According to  Crux reported. Duterte was young then and I was afraid of what would happen… How could we complain? We were scaredDuring his most recent interview, he also defended his ‘brutal’ war on drugs – which has so far lead to the death of 3,700 people – saying it was crucial if the next generation were to survive.

‘We have three million drug addicts, and it’s growing,’ he told Al Jazeera.
‘So if we do not interdict this problem, the next generation will be having a serious problem.

He said” ‘You destroy my country, I’ll kill you. And it’s a legitimate thing. If you destroy our young children, I will kill you. That is a very correct statement.
‘There is nothing wrong in trying to preserve the interest of the next generation,’ Duterte added.
During the interview Duterte also touched on the fact that innocent children and bystanders had been killed in the crossfire, calling them ‘collateral damage’.
‘These lives lost – some of them were lost during legitimate encounters with the police,’ he said, hinting at something untoward. 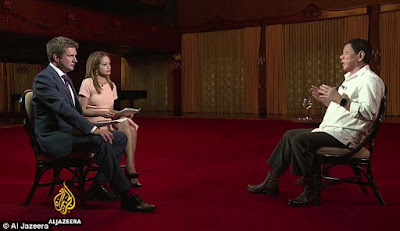 ‘I do not care about what the human rights guys say, I have a duty to preserve the generation’, he later said.
‘If it involves human rights, I don’t give a sh**’.
Duterte has drawn criticism from around the world for his tough and deadly stance on drug crime in the Philippines.
It was his signature policy and is popular among Filipinos who elected him in May by a huge margin.
The death toll stands at around 3,700, with 1,377 shot by police in operations.
Activists believe the rest were mostly vigilante killings.