The Ooni made the announcement on Thursday, September 29, 2016 in his palace when he unveiled the singer to his subjects and the entire public.

Speaking at the event, the Ooni urged the new ambassadors to take his trust in them seriously as he believes they have achieved so much that they can make positive impacts in preaching a violence free world.

“I want to stress that you should understand that this role you are given should not be taken with a pinch of salt. You have all shown exemplary acts in the Nigerian entertainment world and over the years, you all have individually and collectively given your voice to ending violence in our world. 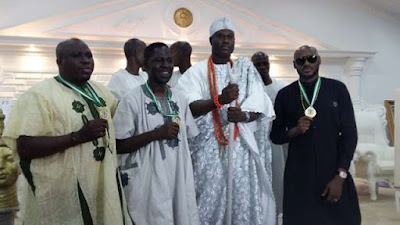 “I will urge you to strive harder to ensure you preach peace and unity everywhere you go and be an ambassador of the initiative which I believe we youths have to combat the act of terror and violence in the world,” Ooni said.
Reacting to the investiture, 2Face said he is glad and honoured to have been noticed by the monarch saying he will do all his best to ensure he preaches peace always.

“For me, the Ooni has just exemplified the true essence of the type of monarch we need at this point in Nigeria. His love for preaching and making peace has been the mantra of his reign and I’m glad to be part of that mantra.”

On his part, Gbenga Adeyinka 1st said he is more happy to be honoured by the respected monarch even though he had always been a peace ambassador.

Cally Ikpe, who is widely known for his TV show, Da New LiveBeats and the Nigeria Music Video Awards, said he is glad with the honour bestowed on him.