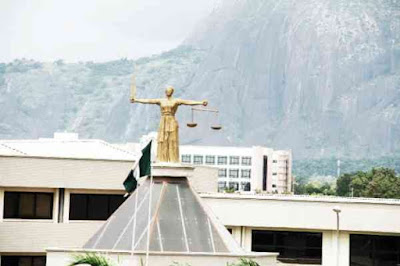 The report followed a critical examination of the extant laws with regards to raids by  Department of State Services (DSS) for the  arrest of two Supreme Court Justices and others last week , sting operations, issuance of search warrants, arrests and the provisions of the Administration of Criminal Justice Act (ACJA) 2015 and the powers of the National Judicial Council (NJC), among others.

According the source, after a high level legal review of DSS’ actions, it was found that the agency acted in accordance with the extant laws and in line with its policing powers.

After the review, it was found that “the actions of the DSS in the arrest and search of the premises of judges and justices can be placed firmly within the ambit of the law, sentimental and emotional considerations notwithstanding.”
The team of legal experts, the source said, concluded that Nigeria is not the first country to investigate and prosecute judges suspected of committing crime.

ALSO READ: Due to corrupt Judges Nnamdi Kanu loos faith in the judiciary system he ask for the withdraw of  Second Judge John Tsoho from IPOB Leader, Nnamdi Kanu’s Trial

According to thenation report,“The Federal Bureau of Investigation (FBI) in the United States of America (a body similar to DSS) has at various times, prominently in January 2013, May 2014, and November 2015 arrested a number of judges for bribery, corruption and other similar offences; subjected the Judges to trial at the end of which the convicted judges were imprisoned. Nearer to home, neighbours like Ghana and Kenya had also cleansed their respective judiciaries through investigation and prosecution of Judges suspected of commission of corruption,” the team said.

Section 149 (1) (2) ACJA states: “Where any building or other thing or place liable to search is closed, a person residing in or being in charge of the building, thing or place shall, on demand of the police officer or other person executing the search warrant, allow him free and unhindered access to it and afford all reasonable facilities for its search.

“Where access into the building, thing or place cannot be so obtained, the police officer or other person executing the search warrant may proceed in the manner prescribed by sections 9, 10, 12 and 13 of this Act.”

The provisions, said the source, are similar to sections 7 and 112 of the Criminal Procedure Law and followed by the DSS.

“By section 111 of the Criminal Procedure Law, a search warrant may be issued and executed on any day including a Sunday or public holiday. It shall however be executed between the hours of five (5) o’clock in the forenoon and eight (8) o’clock at night but the court may, in its discretion, authorise by the warrant the execution of the warrant at any hour.

“Where the court authorises the execution of a search warrant at any hour other than between the hours of 5 o’clock in the forenoon and 8 o’clock at night, such authorisation may be contained in the warrant at the time of issue or may be endorsed thereon by any magistrate at any time thereafter prior to its execution.”

On who can execute search and arrest warrants, the source said section 4 of the Police Act 1967, which outlines the general duties of the Police to include “the prevention and detection of crime, the apprehension of offenders,” did not preclude other agencies.
The source, a member of the team, said while a particular federal judge had alleged that he complied at gunpoint, the judge was not arrested until his lawyer came on the scene on his request and affirmed that the search warrants were in order.

Besides, the source added that while some of the judges in their statements said the foreign currencies found on them were from their unspent estacode, a claim said to be untenable considering the sums of money involved, another judge was said to have explained the huge sums of money away as proceeds of his rice selling business.

According to the source, it was discovered that the DSS followed sections 148 of the ACJA, which states: “A search warrant may be issued and executed at any time on any day, including a Sunday and public holiday.

“Whereas Section 2 of the Police Act defines a Police Officer as ‘any member of the Force,’ the ACJA defines a police officer to include ‘any member of the Nigeria Police established by the Police Act or where the context so admits, shall include any officer of any law enforcement agency established by an Act of the National Assembly.’
“The bone of contention in the public discourse hinge on whether the DSS has the power to undertake the operations it undertook in relation to the arrested judges/justices. To determine whether the action of the DSS was intra or ultra-vires, it is important to consider the mandate of the DSS as enshrined under the law.

“By section 2 (3) of the National Security Agencies Act 1986, Cap. 278 LFN 1990, the State Security Service is charged with responsibility for: (a) the prevention and detection within Nigeria of any crime against the internal security of Nigeria; (b) the protection and preservation of all non-military classified matters concerning the internal security of Nigeria; and (c) such other responsibilities affecting internal security within Nigeria as the National Assembly or the President, as the case may be, may deem necessary.”

The source said the experts found that “in the discharge of their responsibilities as they relate to searches and arrests, staff of DSS are conferred with the powers of Superior Police Officers.”