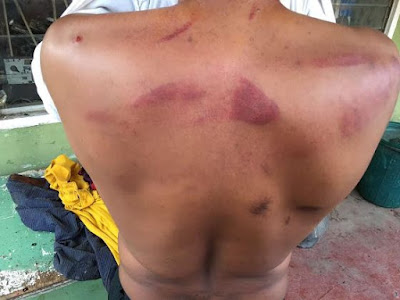 Nigerian Army personnel last Saturday beat the living daylights out of a computer salesman, Maxwell Nwosu at Ikeja. The Army personnel identified simply as Lieutenant Adeniji was allegedly hired to by Nwosu’s customer who bought a computer keyboard one month ago.

The Keyboard was said to have developed a fault, prompting the customer to contact the army personnel who followed him to the shop. The military personnel had pounced on the computer salesman and allegedly beat him to coma.Narrating what transpired, Nwosu said: “Last Saturday at about 3:00pm, some group of soldiers, one claimed to be Lt. Adeniji, a resident of block 22 Ikeja cantonment is the chief perpetrator of this reckless misuse of office. “It will amaze you to know that this started purely as a civil matter between my brother and a customer who felt insulted and called his soldier brothers (all in mufti).This issue was reported at a nearby police post and it was resolved peacefully even though we felt unfairly treated. To everyone’s surprise, this men went back only to return with three other soldiers on uniform. The soldiers embarked on a beating spree. Myself and a customer who pleaded on my behalf were beaten to stupor and thrown into the gutter to roll in it. As I speak with you, I am still taking treatments and the other man’s condition is in bad shape in the hospital because of the injuries we sustained. 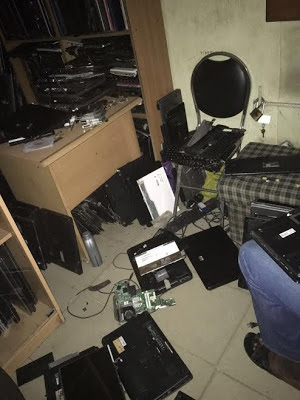 A lot of laptops and other valuables were destroyed in my office and my phone was smashed by one of the soldiers when he saw me making call. “One of the soldiers who was flagging something that looks like a knife threatened to stab my brother when they come back on Monday or anytime soon. Our office is now in total mess and our lives in danger all because of an of argument between civilians. “It would interest you to know that this has become a habit by soldiers from Ikeja cantonment who are often used by friends and relatives to cause serious havoc and unnecessary tension amongst civilians.
ALSO READ: Boko Haram leader Shekau fatally injured says Nigeria Army
Today most of my customers who saw how I was ruthlessly assaulted before the public think I am a criminal.“This is reckless abuse of uniform and show of impunity. Please I have so much faith in the army disciplinary unit, and do believe that by the time this matter is being investigated, the officers involved would be punished and be meant to pay for whatever they have destroyed out of their misconduct.“This would serve as a deterrent to people who bring bad names to our institutions. Picture evidences are with me for more on this. The media should help me.” He said. Army spokesman in Lagos, Lieutenant Colonel Samuel Kingsley noted that the issue has not been brought to the notice of the Nigerian Army 81 Division. Spokesman of 9 Brigade, Nigerian Army, Ikeja, Major Wale Badamosi told The Guardian on telephone that he has directed the complainant on how to go about the matter. His words: “Someone called me yesterday on this matter and I advised him how to go about it.”
Also, President Muhammadu Buhari GCFR Hands over Two Presidential Aircraft to Nigerian Air Force
Advertisements
news