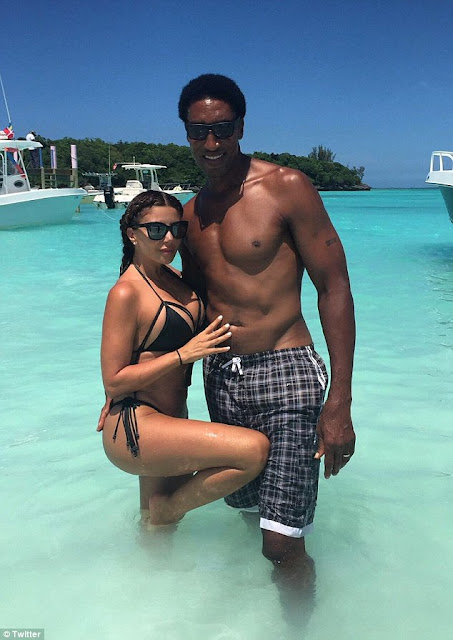 Former NBA star Scottie Pippen, 51, filed papers in Fort Lauderdale, Florida, last week after discovering that his 43-year-old wife had been spending too much time with Georgia rapper Future, 32,
In the documents, filed on October 18, he asked for full custody of the couple’s four children as well as an ‘amendment’ to the couple’s pre-nuptial agreement – and applied to take the family back to Chicago where he spent much of his career.
No sooner had Scottie filed for divorce from his wife of nearly 20 years that rumors swirled that she was involved with hip hop artist Future.

Menawhile, Larsa has been telling friends that Scottie has not been exactly true blue.
‘He’s absolutely no angel himself,’ a confidante tells DailyMail.com. ‘But he basically told her he will spend his last dollar on making her life a living hell.’
Larsa, who has a starring role in Bravo reality show Real Housewives of Miami, is currently in Los Angeles where she is being comforted by friends.

Scottie and Larsa, the NBA champ’s second wife, married in 1997 and went on to have four children: Sophia, Justin, Preston and Scottie Jr.
The couple, who are thought to be worth approximately $50m, spent most of their married life in Chicago and Florida, although Larsa’s appetite for celebrity also frequently took her to Los Angeles.
Along with other Real Housewives of Miami stars, Larsa counts the Kardashian clan, including Kim, among her closest friends. 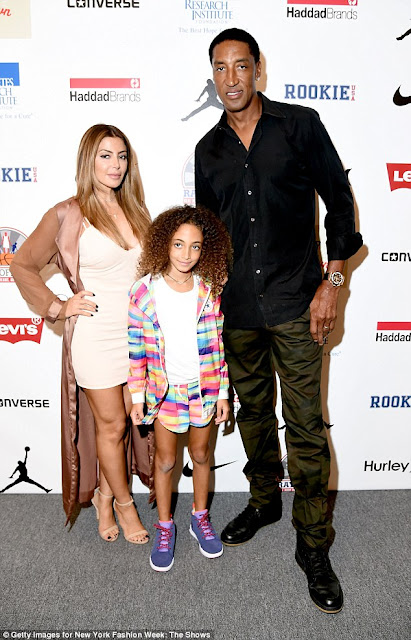 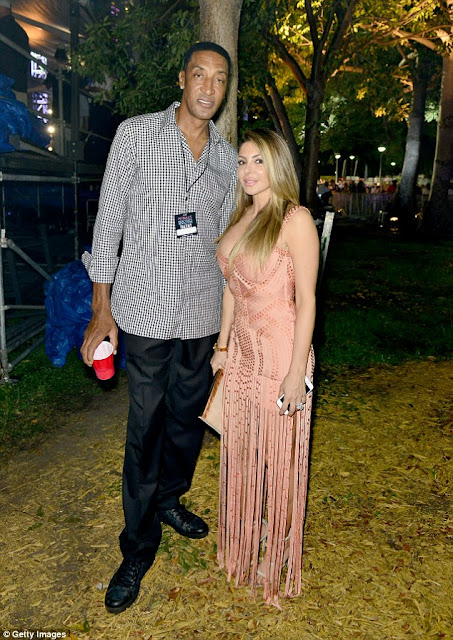 Indeed, so close is Larsa to Kim, she was among the select handful of guests to attend the 35-year-old’s lavish May 2014 wedding in Florence, Italy.
The divorce documents also reveal the NBA star wants to relocate the children to Chicago from their Miami home.
‘If the Petition…is not granted, then it is in the minor children’s best interests that the Husband be awarded the majority of timesharing with the minor children during the pendency of this action and permanently thereafter,’ his
attorney wrote.
Mr Pippen, who is worth an estimated $50 million, pleaded with the court to not demand he pay alimony to his wife Larsa.

Signs that all was not well in the Pippen’s 19-year marriage emerged earlier this month after police were twice called to their $11m Fort Lauderdale mansion.
Cops would not comment on the cause of the visits, on October 1 and October 4, beyond saying it was for a ‘domestic disturbance’.
Less than two weeks later, Scottie filed for divorce and demanded ‘ultimate responsibility’ for the children.
Larsa has now hit back, with an insider telling DailyMail.com that the petition was filed purely ‘to screw with her’.
‘It’s a real nightmare,’ said the friend. ‘It’s like World War III and they’re completely at odds.’