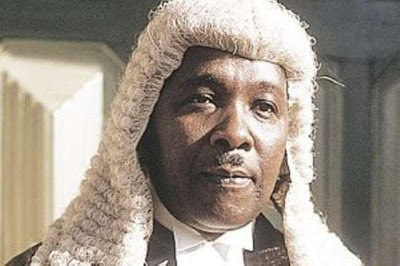 Justice Adeniyi Ademola who was among the judges that were arrested and detained last Saturday by agents of the Department of State Security, says he was made to sign a confessional statement at the DSS office with a gun pointed at him.

In a letter addressed to the Chief Justice of Nigeria, Justice Ademola alleged that the sting operation carried out by DSS at his home in Abuja, was a personal vendetta against him masterminded by the Attorney General of the Federation and Minister of Justice, Abubakar Malami.

According to Justice Ademola, Malami is trying to get at him because while he was serving as a Federal judge in Kano between 2004-2008, he ordered the arrest of Malami for being involved in professional misconduct. In the letter addressed to the CJN, Justice Ademola stated that the DSS operatives held guns to his head to sign a document detailing items allegedly found in his house as well as confessional statements.

DSS in a statement released after the arrest of the seven judges in various parts of the country, stated that it recovered over N362 million during the operation. The arrest and detention involved two Supreme Court justices, Sylvester Ngwuta and Inyang Okoro, and two judges of the Federal High Court, Ademola (Abuja Division) and Muazu Pindiga (Gombe Division), was widely criticised.

ALSO READ:Dasuki to Federal Govt you violation the order of my two court bail. I’m not ready for my trial to continue

Justice Ademola’s letter to the CJN reads in part “Contrary to media report being circulated, I have never confessed to any crime or implicated anybody, including judges, in my statement obtained from me by the DSS. What is more intriguing in this whole episode is that I see it as a vendetta/revenge from the Hon. Attorney General of the Federation, Abubakar Mallami, SAN, (who) whilst I was in Kano between 2004 and 2008 as a Federal High Court judge was involved in a professional misconduct necessitating his arrest and detention by my order. However, with the intervention of the Nigerian Bar Association, Kano Branch, the allegation of misconduct was later withdrawn by me. Consequently, the National Judicial Council referred Abubakar Mallami to the NBA Disciplinary Committee for disciplinary action. It was a result of this he was denied the rank of SAN by the Legal Practitioners Privileges Committee for the period of four years, until when he produced a fake letter of apology, purportedly, addressed to me. It was then he was conferred with the rank. Since the above incident, Abubakar Mallami has threatened to revenge and swore to do anything to bring me down. My Lord, with this infringement of my fundamental right, I seek for the leave to commence an action against the DSS to encore my right that was breached,” he stated.

Justice Ademola also alleged that he was arrested by the DSS because he granted bail to former National Security Adviser, Sambo Dasuki, and also freed the leader of the Indigenous People of Biafra, Nnamdi Kanu.

“For and interest of my life, and unknown persons with mask on their faces, I collected the written items and signed the document. Upon signing the document, they told me that I am under arrest and ordered me with guns still pointed at me to move outside. As I was going, they told me they were taking me to their office, Department of State Services office, without showing any warrant of arrest. I obeyed them and about six o’clock in the morning, I was whisked away from my residence to the DSS office without any warrant of arrest or reason for my arrest. From the time of my arrival at the DSS office, at about 6:45am on 8/10/2016, I was not told what my crime was for over 24 hours till the evening of 9/10/2016. A DSS official finally informed me that the search of my house and arrest were based on these three allegations: petition of Hon. Jenkins Duvie dated 4th of April 2016 to the National Judicial Council; granting bail to Col. Sambo Dasuki and the unconditional release of Nnamdi Kanu; and using my office to secure my wife’s appointment as the head of civil service through Senator Bola Tinubu