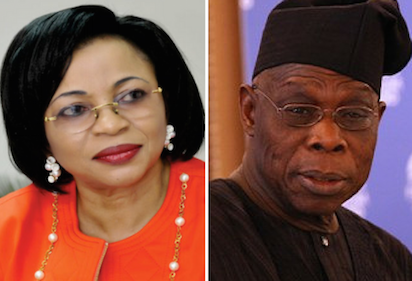 Chief Olusegun Obasanjo has said that Africa’s richest woman, Mrs Folorunsho Alakija was one of the 25 people he made billionaires. Vanguard reports that the former president made this revelation on Saturday, October 29 2016 at the Tony Elumelu Foundation Entrepreneurship Forum.

According to Vanguard, the former president was reacting to an allegation by Alakija at the event, that the Obasanjo administration frustrated her effort when she ventured into oil business.She alleged administration illegally took an oil block allocated to her company after her family had invested all its savings to strike oil in commercial quantity.

“This oil block is in 5000 feet depth of water and was extremely difficult to explore. “It took 15 years from the time that we were awarded the licence in 1993 till 2008 when we struck the first oil “When this event happened, 60 per cent out of our 60 per cent equity in the business, was forcefully taken from us by the government of the day without due process. “We had to fight back by going to court to seek redress and it took another 12 years for justice to be served in our favour. “In all those years it was my trust in God, my perseverance and the support of my family that got me going,” she said. .
She used her experiences to charge the 2000 budding entrepreneurs at the event to be dogged, determined and not to give up in the face of challenges. When Obasanjo spoke, the former president seized the opportunity to reply to the allegation by Alakija.
“There is a saying in my part of the world that when a proverb touches you and you failed to reply, then you are a coward,” he said.

“For you to come here and say that, for no cause whatsoever, you were denied what was rightfully yours, is not fair. “I do not know you from Adam and there is no reason I would have denied you what rightfully belonged to you. “So, you have struggled, and you have struck oil. God bless your heart. “My delight is to be able to create Nigerian billionaire and I always say it that my aim, when I was in government was to create 50 Nigerian billionaires. “Unfortunately I failed. I created only 25 and Madam, you are one of them,” he said.

ALSO READ:pictures from Obasanjo’s visit to the state house