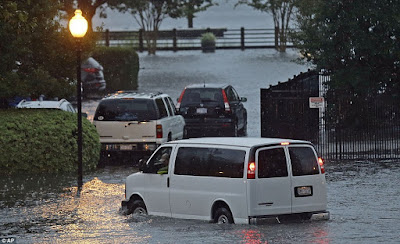 The streets of Wilmington, North Carolina, were entirely flooded on Saturday afternoon as Hurricane Matthew continued to pound the east coast with torrential rain

Hurricane Matthew struck North Carolina on Saturday afternoon, the final place it is expected to hit after ravaging the southeast Atlantic coast for days.

Despite its slowing pace and weakening strength, life-threatening flash floods and thrashing rain were seen across the North Carolina coast with more than 1ft of rain dumped in the past 24 hours.

The total cost of the damage could be upwards of $6billion. Matthew is expected to tail off over the Atlantic before it reaches the Virginia state border.

By 11pm, the Matthew was 35 miles south of Cape Lookout in North Carolina. A hurricane warning remained in place for Myrtle Beach and Wilmington while tornado and severe flash flooding warnings were in place elsewhere. 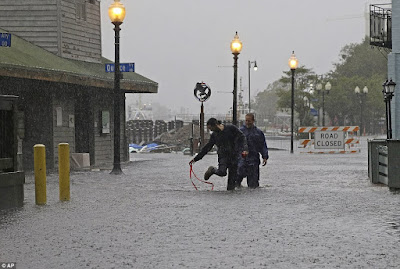 Three people died trying to escape the floods in their cars while one drowned after being swept into a creek.  It brings the US death toll to 14, with another 10 people already dead in Florida and Georgia.

More than 20 cars were stranded on Interstate 95 between two flooded areas.

Miraculously, none were killed in South Carolina where 9ft waves crashed over seawalls including the famous Battery seawall in Charleston on Saturday morning. 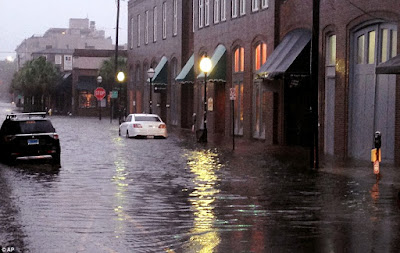 Some 20 inches of rain was dumped on the state before it made landfall at around 11am. 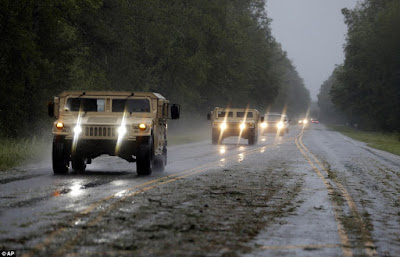 Military vehicles descended on the town of Wagram, North Carolina, to help lessen the devastation and rescue anyone stranded in floods on Saturday 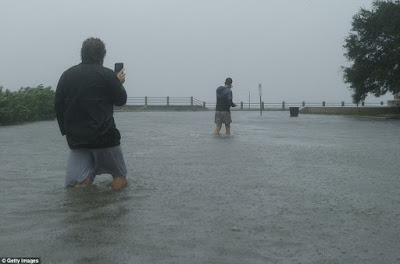 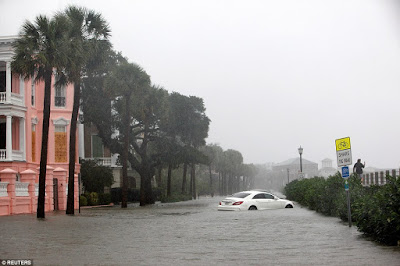 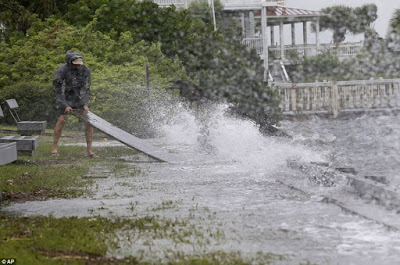 Wrightsville Beach, a resident dislodged timber from an overflowing seawall as waves continued to grow in height One Charleston resident captured incredible footage of the flood waters streaming through the city’s streets
As making this report the number of death  row is stated below.
FLORIDA: 6
GEORGIA: 4
SOUTH CAROLINA: 0
NORTH CAROLINA: 4
HAITI: 877