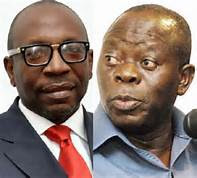 In a statement by the publicity secretary of PDP in the state, Mr Nwanosike Sam, over the weekend in Port Harcourt, accused INEC of manipulating the Edo poll in favour of the All Progressives Congress (APC).

According to Vanguard, Mr Nwanosike Sam alleged that the result finally released by INEC on the election did not tally with what was collated at most of the polling units in Edo state.

He said: “The result that was announced in Edo State did not correspond with the results collated from most of the polling units. We commend former President Jonathan for showing Nigerians that he could supervise a credible election. As an opposition party candidate, the outgoing governor of Edo State won an election conducted by the PDP.  But today, they will not allow the will of the people in that state to prevail.”

Meanwhile, Pastor Osagie Ize-Iyamu, the governorship candidate of the People’s Democratic Party (PDP) in the recently concluded Edo state election has opened up after his loss. Ize-Iyamu who spoke with Vanguard after his defeat by Godwin Obaseki of the All Progressives Congress (APC), has now said he is committing his counterparts into the hands of God.