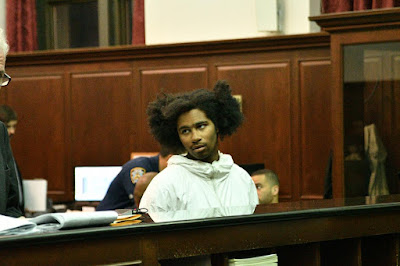 A 23 year old man, Gary Bias has been accused of fatally beating his 82 year old great-grandmother, Ella-Nae Bias,  to death and tying up his mom. Bias told police after he got arrested that he regretted not having the chance to finish off his mother.Gary Bias’ twisted admission was revealed by prosecutors at his Saturday arraignment as he was hit with murder and attempted murder charges.
The 23-year-old accused killer was ordered held without bail hours after members of his Alphabet City neighborhood called for his head.A neighbour of the great-grandmother, Moses Ware said:

“If I see the kid I would break his neck”. “That lady was so nice.”

“It’s a sad situation, I just want to cry and scream”. “It’s so unbelievable for a great grandson to kill his great grandmother. When you’re 82 years old, how can you defend yourself from your own blood?”

Police say that Bias went to his Great-grandmother’s house looking for money and clothes and when she said she didn’t have any money, he duct-taped her wrists and ankles to a chair before beating her to death on Friday inside her apartment.According to Police, after killing her, Gary Bias then called his 39-year-old mother, claiming that his great-grandmother wanted to see her.When the mother arrived, Ella-Nae was already dead and Gary was “lying in wait,” a police source said.As soon as his mother entered the apartment, Gary overpowered her, beat and kicked her and then bound her to a chair and covered her mouth with duct tape.When she finally stopped resisting about 5:30 p.m., Bias left the apartment.His mom was able to free herself and bang on neighbors doors, begging them to call the police, officials said.Police responded and captured Bias as he was fleeing into Brooklyn through the Williamsburg Bridge.Stunned family members said Bias lived her entire life in the Lillian Wald Houses.

“She lived her whole life in that apartment,” said one of her grandsons, who wished not to be named. “She had all of her kids there and looked after her grandkids there. She was the main branch of the family.”

Bias had six children, but one died at a young age, family members said. Her remaining living children, three daughters and two sons and grandchildren lived close by and would often visit the elderly woman.

“Everyone was close with her,” her grandson said. “If anyone wanted something to be done, she was the one to do it. She was a good person.”

Gary Bias is a career felon who has been arrested 16 times and was last arrested in November when he attacked his 42-year-old step-father with a mini-baseball bat, cops said.Neighbors said they knew Gary but never realized he could be so violent.

“That kid had a good upbringing, you would never suspect this of him,” neighbor Tyrone Bethea said. “The kid was a quiet, loving kid, but I guess he was a walking time bomb. I don’t know what set him off. He looked like he had a lot of things bottled up.”