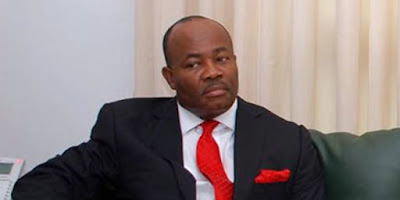 Read the press statement of Senator Godswill Akpabio below…

The attention of the Senate Minority Leader, Senator Godswill Akpabio has denied any connection to the alleged bribery of Justices of the Supreme Court. A sensational story making the rounds in the social media and circulated by the Akwa Ibom State chapter of the All Progressives Congress (APC) with a screaming headline: “Breaking News! 2015 A’Ibom polls: Fear grips Akpabio over arrest of Supreme Court Justices,” had alleged that the Senator was scared over the ordeal of the Judges.

A statement by the Special Assistant to the Senate Minority Leader, Mr Anietie Ekong described the story as being ” spurious, baseless, false and the figment of the imagination of mischief makers who concocted it. Their frantic and desperate attempt to link Senator Akpabio with the saga is to tarnish his image in their continuing pull-him-down syndrome, which has increased in intensity since the party lost Akwa Ibom State.”According to the statement “the avoidance of doubt, we wish to state most emphatically that Senator Akpabio is in no way involved in the alleged bribery of Supreme Court judges and so has no reason whatsoever to be scared over the arrest of the Judges. He has had no contact with any Judge with the intention of bribing them.”Continuing the statement said: “In the last few years, Senator Akpabio’s only contact with Supreme Court Justices was on December 13, 2015 when as the Vice-Chairman of the Senate Committee on Judiciary, Human Rights and Legal Matters the members, led by the Chairman of the Committee, Senator David Umaru paid a courtesy visit to the Chief Justice of the Federation and other Supreme Court Justices. After the event which was widely reported the Supreme Court Justices and members of the committee took group photographs.“Senator Akpabio as a democrat believes in the sanctity of the electoral process and so has not been involved in bribing any Judge as it is not in his character to do so. His election as a Senator which was seen as a no contest after a sterling performance as Governor of Akwa Ibom State was widely held as free and fair.“Senator Akpabio like many other Nigerians learnt of the news of the arrest of the Judges/ Justices on Saturday while he was in Irrua, Edo State when he along with the Senate President and other Senators attended the wedding of the daughter of their colleague, Senator Clifford Ordia.“It is most disingenuous and reprehensible for Akwa Ibom State APC to attempt to link Senator Akpabio to something he has no knowledge of and impute he was gripped with fear when he was busy celebrating with his colleague on the marriage of his daughter in Irrua, Esan Central Local Government of Edo State.“We condemn it in very strong terms and advice those whose stock in trade and preoccupation is to link Senator Akpabio to every ignominious scheme to desist from such pull-him-down syndrome. It is however sad that Akwa Ibom State APC, rather than wait for the investigation to take its course, have already condemned their son, Justice Inyang Okoro and celebrate his present ordeal.“Senator Akpabio will explore available legal remedies to protect his hard earned reputation from being dragged into the mud by political mischief makers. Distinguished Senator Akpabio however cautions all political players to take actions that will sustain democracy and not actions that imperil our hard earned democracy,” the statement said.