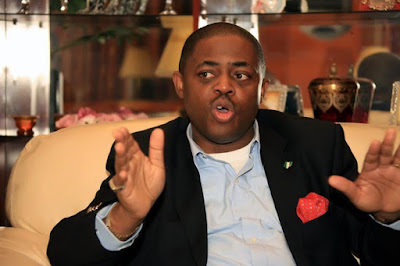 The Former Minister has reacted to this morning’s arrest of some judges by agents of the SSS. Read below

Their homes were raided by hundreds of fully armed DSS commandos between 1.00 and 2.00 a.m. this morning. Their streets were surrounded and sealed up. Their gates and front doors were smashed open and they forcefully and violently arrested and detained. Their families and loved ones were traumatized and terrorized.

Their staff and members of their household were held captive, threatened and sent scampering for cover under their beds.
Yet those that suffered these gross violations of their fundamental human rights, civil liberties and indignities were not wily and desperate politicians or hardened miltary men that were fighting and conspiring against the government or plotting a military coup d’etat.
They were not dangerous dissidents or Boko Haram terrorists.
They were not battle-hardened Niger Deltan Avengers or seasoned OPC and IPOB fighters.
They were not members of a dangerous and evil armed cult that were plotting to kill innocent people and they were not a group of radical and desperate secessionists or freedom fighters.
They were not angry students or trade unionists that were planning to block the streets, to stop all movement and activity, to bring the country to a standstill or to burn the nation down.
They were none of these things and included none of these groups or people.
Instead they were all senior and respected members of the Nigerian judiciary.
They included two Supreme Court judges (one of whom is next in line to be the Chief Justice of the Federation) and three Federal High Court judges.
Three are Igbo, one is Yoruba and one is from the south south.
All of them are southerners.
Governor Wike of Rivers state was almost shot dead when he attempted to protect the home of one of the judges in Port Harcourt and stop them from arresting him.
The truth is that we are in trouble in this country. The motherland and all that we hold dear is under attack from a ravenous and dictatorial President and government.
When those that are constitutionally charged and empowered to protect us from tyranny and the abuse of power by a vicious, violent, murderous and lawless government and its murderous security agencies are themselves under siege all hope is lost.
If the judges cannot protect us and if they themselves have become victims of barbarous tyranny then it is time for the people to rise up, take to the streets, resist the evil and fight against our oppressors.
Sons and daughters of Nigeria, we must not give in to fear and we must not be silenced.
We must defend the rights of our people and fight for our homeland.
Now is the time to protest in any way that we possibly can and to take our country back from these animals and barbarians. Now is the the time to say “enough is enough!”
If we do not do so we shall be slaves forever. It is our God-given right and sacred duty to resist tyranny in every shape and form.
If nothing else history, scripture and all the Holy Books of the three great faiths of Christianity, Islam and Judaism teach us that.
Now is the time to shed our fears and to stand up like the true patriots and free men and women that we were born to be and do so.
Now is the time to say “thus far and no further” and to say “no more” and be our brothers keeper.
Now is the time to stop sitting on the fence and acting as if all is well.
May the Living God fill us with His Spirit and grant us courage. May He strengthen and embolden us.
May He guide, lead, protect and deliver us as we move forward to confront the evil that plagues our land and speak truth to power.
May He, at the very end, bless our land and grant us victory.
(FFK, 8th Oct. 2016)
Advertisements
Opinion