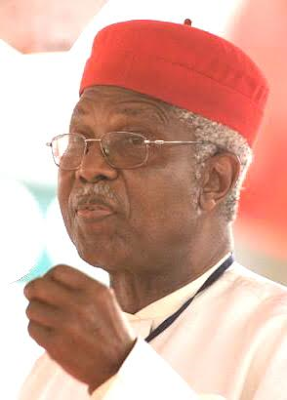 Dr. Alex Ekwueme, the SECOND Republic vice president of Nigeria, has explained the need for Igbos to trust each other as they did in the past, affirming that that is the only way Igbo land would move forward in the Nigeria project.Dr. Ekwueme, who said this Sunday at the traders’ summit and award ceremony organized by Anambra Consensus Project, ACP, at Amaokpala in Orumba Norht local government area of the state; to honour outstanding traders in all the 57 major markets in Anambra State, noted that he recalled that Igbo were strongly united before and immediately after Nigerian Independence wondering what went wrong over the years based on what is currently happening in the Igbo –speaking states of the country.

“When I returned to Nigeria after my studies abroad, I worked for the then ESSO West Africa Limited and the job took me to many cities in the Northern part of the country. I found out that there was no place you would go and won’t find an Igbo man and they all cooperated well” If you wanted to buy APC medicine in any city in the North, whether it was Kano, Maiduguri, Kaduna, Bauchi, Bida, Minna, anywhere, it was an Igbo person that would sell it to you. Igbo people were so industrious that Northerners were saying that after the white man, the next most important person created by God was Igbo”.

“When Igbo was Igbo, there was so much unity, such that once Igbo leaders met and took a decision, every Igbo person would abide by it. The trust among Igbo was responsible for the reason apprenticeship became popular with the result that parents would allow their children to stay with an established Igbo man to learn a trade for periods ranging from five to 10 years after which the apprentice would then be settled to start his own business.

“Even after the settlement, the newly settled young trader would be getting goods on credit from his former master and return the money after sale because of the trust that existed. But lack of trust has diminished that age long cooperation between the master and his former apprentice, which is very worrisome. “The main problem of the Igbo today is lack of trust. If we can rebuild the trust among ourselves, our people will be better for it.”