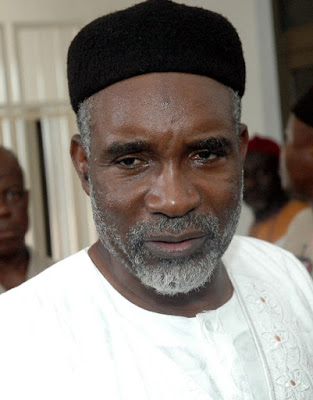 The former governor of Adamawa, Murtala Nyako, and his son where  re-arraigned before Justice Okon Abang of the Federal High Court, Abuja. by  Economic and Financial Crimes Commission (EFCC).

Justice Chukwu had admitted the defendants to bail in the sum of N350 million each, with two sureties in like sum.

Before the demise of Chukwu, the prosecution led by Rotimi Jacobs (SAN), had called six witnesses.

The defendants were arraigned on a 37- count charge of money laundering, involving alleged diversion of over N29 billion belonging to Adamawa government.

The the EFCC prosecuting counsel, Adebisi Adeniyi, told the court that the matter was starting afresh.

He urged the court to accept the charge and allow same be read to the defendants for their plea.

When the matter was read to the defendants, they pleaded not guilty to the charges.

The prosecuting counsel made an oral application to allow the defendants continue with their former bail conditions.

He also applied that the court should make the sureties file an affidavit in readiness to continue as sureties to the defendants.

The defence counsel, Kanu Agabi (SAN), opposed the application to make the sureties to file an affidavit.

Abang, in his ruling held that the defendants continue to enjoy the bail conditions earlier granted by late Chukwu, following their plea.

Abang, however, refused the application of the prosecutor to make the defendants’ sureties to file a fresh affidavit.

He pointed out that the court could not review an earlier bail condition that compelled the sureties to file an affidavit in readiness to the defendants.

“It is the responsibility of the defendants to inform their sureties that the matter has been reassigned to this court for trial de novo and the defendants shall hold their bail condition granted by the late Chukwu,” Abang said.

He adjourned the matter till November 17 and November 21 for commencement of trial.