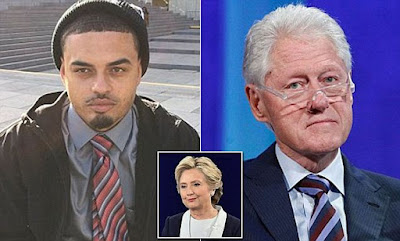 Danney Williams, 30, claims he is the biological son of former President Bill Clinton

The man claiming to be Bill Clinton’s abandoned son broke his long silence on Tuesday by likening the former first family’s treatment of him to slave owners.

Williams said he desperately wants to meet Bill Clinton. ‘Like any child, I want to know my dad and I want him to know me,’ he said in the nine-minute tape.

‘I am his only son in the world and he’s my only dad. We have to come together, we have to.’
Williams has long claimed that his prostitute mother met Clinton when she was working on the streets of Little Rock, Arkansas. He claims she told him they had sex 13 times. But all attempts to get him to speak publicly have failed until now.

Williams, 30, a father of five, contrasts his hardscrabble upbringing with that of Chelsea Clinton, who he calls his sister.

‘In 1995 when my father was president of the United States, the state of Arkansas put us in foster care,’ he says in the nine-minute video. ‘I lived in foster homes.
‘It made me feel horrible because I know his child, Chelsea, was well taken care of and we was house-to-house, hungry at nights.’ He said he dropped out of school in 11th grade to work in a donut shop to support his brothers and sisters.

‘To know that my father was the president, it hurts. Try to imagine that your own father refused to love you, refused to say that you exist. Knowing who my father was and he was so close, yet so far away made my part unbearable.’
Also read :Danney Williams insists he is the biological son of former President Bill Clinton

Williams claims in the video that it was common knowledge around Arkansas that he was Clinton’s child. ‘Everywhere I went, they pointed out: ‘It’s Bill Clinton’s son right there. You look like him, don’t you? The ears, the mouth, the chin, the teeth, the eyes, the nose.

‘I see him in me. You can see a black Bill Clinton. When I’m brushing my hair I can see Bill Clinton with waves hair
ALSO READ:Hillary Clinton wins the second presidential debate, while Trump exceeds expectations

‘I always feel bad about him not wanting to be in my life,’ he added. ‘Was it because I was black? Was there something wrong with me? Why do you not want to be a part of me? It made me even think sometimes of suicide.
Williams was brought up by his aunt Lucille Bolton, because his mother was constantly in and out of prison when he was growing up. Bolton also appears in the video.
She said that Danney’s mother, Bobbi Anne Williams, told her she was pregnant with Clinton’s child months before he was born.