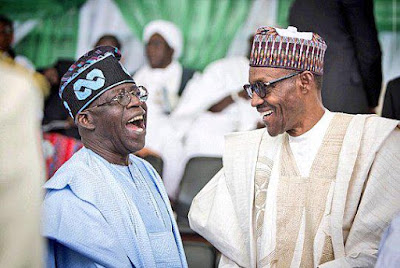 The present trials of Asiwaju Bola Tinubu, the colossus of the Southwest is not surprising to those who have vision. I saw it coming and that was why over two years ago, precisely on Tuesday, May 27, 2014, I wrote a back page op-ed on ThisDay newspaper titled ‘From Battleground to Common Ground’ and in that piece, I said inter alia as follows:

‘A comrade is not for what you are for, neither does he share the same interests as you. A comrade is simply one who is against what you are against. In other words, you are bound by a common enemy.
The All Progressive Congress, is a party founded on this premise.
Those who are enemies of the President (Goodluck Jonathan) and the PDP gathered together to form a party whose foundation is their common enemy.
They share no ideological connection, neither are they friends. In actual fact, they may even hate each other, only that they hate the President and the PDP more and are wiling to temporarily suppress their hatred for each other in other to gang up against their common enemy.
In my experience, it is better to have a party built on common interests than to have one built on a common enemy. This is because as even a political novice will tell you, there are no permanent friends or permanent enemies only permanent interests.
Now, if the above is true, what would happen to a party that is built on a common enemy?
Parties built on this foundation last only as long as the enemy is in power. Once their enemy is no longer in power the party disintegrates.’
It does not matter if you hate Reno Omokri’s guts, but ask yourself if what I said has not turned out to be the truth.
In the space of just a month, Bola Tinubu has been deliberately mystified and treated with such contempt that even those who he considered his worst enemies find themselves feeling sorry for him.
But he should have seen it coming!
The unraveling of Bola Tinubu actually began on the 3rd of June 2016, when President Muhammadu Buhari publicly and right in Tinubu’s face told him at a reception the President held for members of the National Assembly at the Presidential Villa that the All Progressive Congress had no such position as a National Leader.
I know this because a Senator who attended the function called me almost immediately after the event and told me about how the hall descended into almost pin drop silence after the President made that assertion.
I can assure my readers that President Muhammadu Buhari would never have made such a remark prior to the 2015 elections. But who needs a piece of toilet paper after it has done its job!
That remark was the signal that sleeper agents  within the APC were waiting for to begin the unraveling of the masquerade.
Teaching him a lesson in Ondo state is only the beginning. Bola Tinubu’s comeuppance is not yet complete in the eyes of his traducers.
And then look at the way he is portrayed in  Professor John Paden’s biography of the president. Paden portrays Tinubu as a desperate power monger who kept throwing himself at Buhari only to be rejected at each instance. Tinubu, see how low you have fallen!
I do not know why Bola Tinubu is angry at Paden. Did he not read that this was an official biography?
Paden was not there during the horse trading. The book was written with the cooperation of President Buhari. The things he wrote about Tinubu were the accounts he was given by the President.
So Tinubu should call a spade a spade. President Buhari merely told the world what he really thinks of Tinubu.
And look at all the men around President Buhari who got to where they are on the back of Tinubu. Has anyone of them come out to speak in his defense? Where is Vice President Osinbajo? He can blame Jonathan but cannot defend his benefactor. Where is Fashola? He can come up with excuses for giving Nigerians darkness but cannot speak up for his oga? Lai Mohammed is nowhere to be found. Perhaps he is too busy dressing up masquerades or looking for a parastatal under him to loan him some money!
At the end of the day, after all the terrible things the propaganda wing of APC said and did to Ayo Fayose and Femi Fani Kayode, who came to the help of Tinubu but the two men demonized by the very same propaganda machinery that Tinubu helped set up.
And as for Tinubu, I cannot imagine why someone will write a book and insult you in it and still invite you to the launch and you agree to go simply because he is a president.
Even worse, they asked you to write a review for the book and you did! Is this the same Tinubu that was so mouthy under Jonathan? Look at how he has become a chihuahua today. Lord have mercy!
Tinubu! Your Afonja too much!
Did you not see what ex-President Goodluck Jonathan did with the so called Leadership Award. You do not honour a gathering designed to reduce you with your presence. As the late kakanfo MKO Abiola would say ‘a man who allows his head to be used to break a coconut may not live to eat it’!
Even the well respected Pastor Osinbajo cannot even publicly come to your defense and tell the truth of how you helped him secure his exalted office. Yet he is the chief beneficiary of your generosity.
My advise to you, Asiwaju Bola Tinubu, is this: a woman who continues to make herself available to a man that only remembers her when he needs her services to satisfy his lustfulness should not be surprised when her own children deny that she is their mother!
Finally, going forward, before labeling people like Ayo Fayose and Femi Fani-Kayode as enemies, remember that it is better to be insulted with the truth than flattered with a lie.
Omokri is the founder of the Mind of Christ Christian Center in California, author of Shunpiking: No Shortcuts to God and Why Jesus Wept and the host of Transformation with Reno Omokri
Advertisements
Opinion