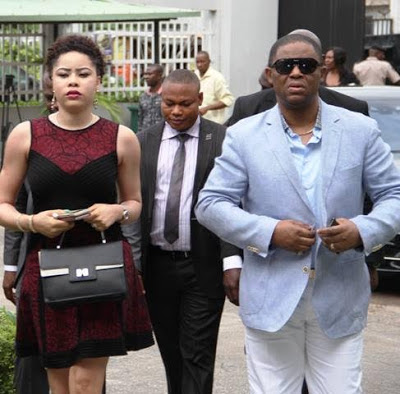 “Yea though I walk through the valley of the shadow of death I fear no evil for thou art with me. Thy rod and thy staff they comfort me”- Psalm 23.

I recited this scripture three times and waited on the Lord quietly and calmly when I heard that my wife and son had been unlawfully apprehended and detained in a bank in far away Ado Ekiti on the orders of the EFCC whilst I was in Lagos.

Somebody should tell Mumu Buhari to stop sending his goons to abduct other peoples wives and 8 month old infant babies and to stop trying to traumatise them, lock them up and destroy their lives simply because they are married to or fathered by opposition politicians and those he hates.
He should leave my wife Precious Chikwendu, my 8 month old son Aragorn and other members of my family alone, face me directly and be a man. Even in war the wives and children of the enemy are out of bounds.
The truth is that Buhari is nothing more than a coward and a bully and he will suffer the consequences of his actions because God will punish him.

ALSO READ: Nigeria at 56 and the worship of BAAL by Femi Fani Kayode

I give thanks to the Living God, the fearless lion that is known as Governor Ayo Fayose and the good people of Ado Ekiti for saving the lives of my loved ones and protecting them from the barbaric and illegal actions and tyranny of the fascists of the EFCC.
I have nothing but contempt for these people. They are the scum of the earth and by the time this is all over they will know that I serve a mighty God.
Despite the threats, persecution, violence and intimidation that my family and I have been subjected to over the last one year my opposition to the Buhari government remains implacable and unrelenting and I refuse to be silenced.
I said that Buhari was an evil man right from the outset and that he would prove to be an incompetent and disasterous President if elected into office and I have been proved right.
If he and his security forces are not killing Shiite Muslims, marginalising Christians, silencing and intimidating critics, locking up members of the opposition, storming the homes of judges or threatening bloggers and journalists they are sponsoring Fulani militants and herdsmen to commit acts of barbarity and terror against their fellow Nigerians.
If they are not impoverishing Nigerians, decimating the economy or freezing the bank accounts of innocent men and women and their family members they are tormenting, abducting and locking up the wives, infants and babies of opposition figures.
If they are not intimidating and charging leaders of the Senate and other senior legislators to court on trumped up charges, murdering IPOB youths, butchering Niger Deltans, humiliating and cheating their own party leaders or discrediting and jailing dissenters they are denigrating women and confining them to the kitchen and bedroom.
Buhari has divided our country along ethnic, religious and regional lines as never before and he has subjected the Nigerian people to levels of starvation, deprivation, poverty and suffering that were hitherto unkown.
And it is not just southerners and Christians that are feeling the pinch and suffering the pain and affliction. Millions of northern Muslims are feeling it as well. If anyone doubts that I challenge Buhari to walk the streets of Kano today and see what happens.
One wonders how things got so bad? One wonders what engendered this terrible affliction and what attracted this deep-rooted curse of a government?
One wonders how a country of 180 million resilient, hard-working, educated, enterprising, adventurous, courageous, cheerful, charitable, forgiving, kind, God-loving, God-fearing and strong-willed people ended up with a President from the dark ages like this?

Sooner than later He will rescue us from the cruel and unrelenting claws of the Dark Angel that presides over the affairs of our land. Blessed be His name forever.