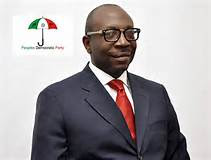 PDP Governorship flag bearer, Pastor Osagie Ize-Iyamu said that if Governor Adams Oshiomhole had listened to the advice of engineers, the flood ravaging many parts of Ugbowo axis along the Benin-Ore Expressway would have been avoided.

Ize-Iyamu said Governor Oshiomhole added the service lanes to the road in order to deceive the people of the state that it was his government that reconstructed parts of the expressway within the Benin metropolis.

He stated this weekend during a PDP rally at Adolor Road in Egor Local Government Area of the state said it was regrettable that a road such as the Adolor Road could be left untouched by the Oshiomhole’s government, assuring that he would prioritise the road if elected.

According to vanguardngr, Osagie Ize-Iyamu said: “At a time the Federal Government was reconstructing the Ugbowo Road, Oshiomhole was campaigning for his second term election. He saw that it could affect his re-election, so he quickly went to the same contractor working on the road and asked them to help him put a lane by the side of the road.

‘’He was advised to do the adjoining roads instead of adding a lane to the sides of the road. He, however, declined the advice given to him because he wanted to create the impression that he was the one doing the Ugbowo Road.

The money spent on the side lanes he constructed could have done the adjoining roads such as Adolor Road. The so called extra lanes were unnecessary, the design was bad and its  consequence is the flooding in the adjoining streets.”