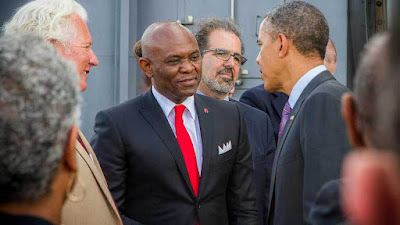 According to a statement made available to newmen, Transcorp Power has supported U.S. President Obama’s Power Africa initiative with a $2.5billion commitment.

Elumelu, while receiving the award, enthusiastically praised stakeholders in the public and private sectors committed to improving access to power in Africa.

He further added: “I also dedicate this to all stakeholders working hard to improve access to power in Africa. I call on others to please join us in this journey to powering Africa out of poverty.

The Chairman of  Heirs Holdings stressed that to ensure a different type of growth trajectory for Africa, one that does not rely exclusively on the export of primary commodities, there must be reliable, accessible, affordable power supply to support industrialization.

“Industrialization must occur on a massive scale for our countries to be powered out of chronic dependency on commodities. We must power Africa’s next phase of development.