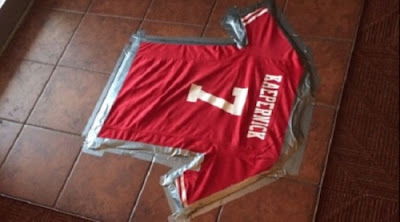 The displeasure for Kaep’s protest has been as widespread as it has been belligerent and racially tinged.

Most of the hollering has been done over interviews, on the radio and on social media.

But one restaurant in Virginia has taken it to another level by taping Kaepernick’s jersey to their floor to be walked over by customers.