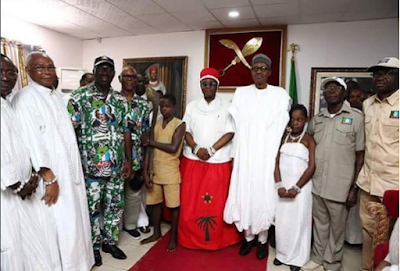 The News Agency of Nigeria (NAN) reports that President Muhammadu Buhari on Tuesday paid a courtesy visit to Crown Prince Eheneden Erediauwa shortly after his arrival in Benin for the All Progressives Congress (APC) mega rally.

The meeting which lasted for about 40 minutes, was held behind closed doors at the palace of Erediauwa, who is also the Edaiken of Uselu.

According to News Agency of Nigeria NAN ,reports that the Buhari’s plane touched down at 10.20AM accompanied by the party’s National Chairman, John Oyegun.

Members of his entourage included Governor Akinwumi Ambode of Lagos State and the, Minister of Labour and Employment, Senator Chris Ngige, among others. 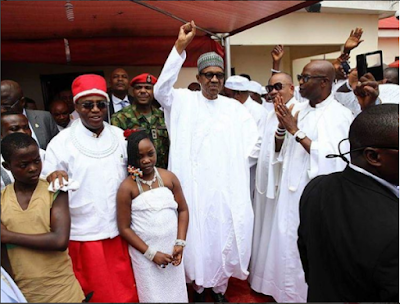 NAN reports heavy security presence around the Benin Airport, Stadium road and adjoining streets ahead of the grand finale of the party’s governorship rally at the Samuel Ogbemudia Stadium in Benin.

A combined team of operatives from the Police, Army, Nigeria Security and Civil Defence Corps (NSCDC) were seen at strategic locations within the Edo capital, to provide maximum security during the rally.

NAN further reports that heavily armed Mobile Police officers were seen within and around the stadium, venue of the rally, with party supporters trooping out in large numbers