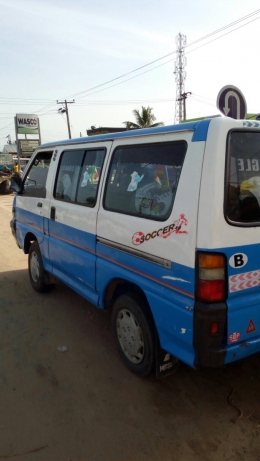 The policeman shot his victim, identified as Ese Eruotor, for allegedly stopping to pick a passenger close to the Agofure park he guards.

According to the Nation report,An eyewitness  Akpokona James  in Warri on Sunday evening, said it all happened on Friday when the policeman pursued the victim from Effurun Roundabout to DSC Roundabout before catching up with him and shooting him dead.

Akpokona James, said “the driver was said to have parked in front of the Agofure park at Roundabout to pick passengers. The policeman was said have pursued him from there with a Camry, caught up with him at DSC Roundabout and shot him”.

The Late Driver , Ese Eruotor, is the first son of his father, Matthew and left behind a four month-old baby. The corpse of the 23-year-old driver has been deposited at a morgue within the Effurun area.
The father of the victim, Matthew Eruotor, also confirmed the incident on Sunday decried the manner his son was killed. He called on the police authorities to ensure that his son’s killer was prosecuted.

The Nation contacted, the Police Public Relations Officer of the Delta state police command, SP Celestina Kalu, confirmed the incident, adding that the police sergeant would be tried and dismissed before being charged to court